Nearly 200 people showed up Friday at the Nebraska Furniture Mart at Village West to hand in their applications and record video auditions for the "Survivor" reality television series.

Kendall Talley, marketing and new media director for KCTV-5, a local CBS affiliate that sponsored the tryouts, said there were about 100 people in line when he arrived at the store just after 9 Friday morning. He said he saw from their tents that at least some of them had camped out for the auditions that began at 10 a.m. and ended at 2 p.m. The camping out may have been unnecessary: just 196 people turned out, after KCTV had predicted 300-400 applicants. The store was one of 48 locations across the country to play host to the casting calls between Jan. 7 and Feb. 3. 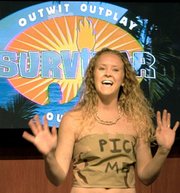 Ashlie Beck of Grain Valley, MO showed her special beach outfit she had under her clothes for the Survivor audition Friday.

Talley said he figured the day's weather forecast -- cold and rainy -- kept many people who otherwise might have driven many miles to the casting call.

Samantha Nunnick didn't have to drive too far. Nunnick, an embalmer and funeral director who lives in Shawnee, said she had watched every episode and learned a lot from her watching about what works and what doesn't. One of those lessons was the importance of self-confidence.

Nunnick said just before her audition taping that she would say, "I'm gonna be the one they're gonna choose."

Some of the applicants said it made them hopeful that Midwesterners seemed to have a good track record on the series, including Tonganoxie native Danni Boatwright, who won last season. Brandon Bellinger, of Manhattan, Kan., was also on the show last season, and signed autographs at the event.

Applicants could meet Bellinger only after taping their segments, so no one got any valuable tips.

He said that anyway "there's not too much advice I can give. Just be yourself."

Bellinger said that when he taped his video audition at an open casting call, he just got in front of the camera and talked.

Bobby Carter drove from Lee's Summit, Mo., to audition for the show. Carter, an architect, said he came because coworkers and friends had encouraged him to, based on his personality.

"I'm an outdoorsman, I coach and I play sports," he said. "They say teamwork is important on the show."

Carter said if won he would give 10 percent of his $1 million winnings to his church, "make sure my family is taken care of, and take a vacation to Disneyland. I've been trying for the last five or six years to go there."

Like many of those who came to try out, Carter didn't know what he would do for his audition taping. The audition consists off a two-minute taped segment in front of the camera, with no rehearsals or retakes allowed.

Talley said there were advantages and disadvantages to trying out through the open casting calls like today versus an applicant's recording his or her own videotape to send to the show.

On the plus side of auditioning at Friday's tryout, reality star hopefuls get a professional cameraman and lighting. On the downside, there are no retakes.

That didn't deter Ryan Gerster, who said he wasn't nervous, just before stepping in front of the camera.

"I don't know what I'm going to say," the St. Joseph resident said, "but I'm a standup comic."

His friend, Rick Wright, also from St. Joseph, said he also didn't know what he was going to say.

He joked after his taping that the two had been joking about their lack of preparation while driving there with six of their friends who also tried out.

Afterward, Gerster said he talked about having been a police officer and a medic, and how he became a standup because those careers didn't work out.

He also said "that if I win, I will spend it mostly boozing with my friends," he said.

Both Wright and Gerster said they don't watch the television show, and Wright said he thought that might just be advantage in their chances at being picked, "because I'm not doing what everyone else is."

While neither Wright nor Gerster nor any of the several people interviewed by the Chieftain waiting in line had any memorable stunt planned for their audition, Talley said he had seen a few that morning performed in front of one of the two cameras.

He saw one woman eating crickets, another having chocolate sauce poured over her before having her boyfriend ripped off her shirt, and another woman who brought a blender and a special list of ingredients. The first letters of each ingredient combined to spell "Survivor," and she had claimed, Talley said, that the "U" ingredient was urine.

She mixed them all together and drank the concoction.

Talley said that as far as he knew, such tactics don't necessarily mean a greater chance of being selected to appear on the show. He said that contestants would be notified individually if they were selected, but that "it's out of our (KCTV's) hands after this."