Eight seniors from the Shawnee Mission Northwest girls basketball team ended their high school playing careers recently. Their impact on the program will be felt in the coming years, if, for nothing else, the resilience they showed in the face of adversity.

The season ended in heartbreak with a last-second miracle shot loss to Lawrence High in the first round of sub-state. The 2006-2007 Cougar girls will be known as a team that gave every team a battle, despite the bounces not always going their way. 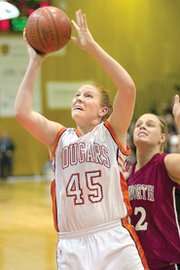 SMNW senior Becca Roberts was one of three Lady Cougars named to the all-Sunflower League squad this season.

Cougars coach John Reiff knew he had a tough team from the season's first game, but he also got a feeling during that game about how the 2006-2007 season might shape up.

"Our very first game was a tough, overtime loss against Shawnee Mission West," said Reiff in recapping the year. "They ended up being ranked fourth in the state. We really had control earlier in the game but then we didn't make free throws and West did. West did what they had to and that loss hurt us a little bit. It kind of set the tone for the year."

Still, the Cougars won their next three games -- all against Sunflower League opponents ----and appeared headed for a successful season, but the bumps in the road kept coming up. Of the team's 11 losses this season, more than half were by five points or less.

Reiff pointed to the Cougars two games with Lawrence this season as examples of what this Northwest team was capable of against tough competition.

In the Cougars first game with the Lions the Northwest girls set a season-high scoring mark of 65 points, while the sub-state game was a memorable slugfest in which Northwest showed some of its early season form.

"We were 9-11 on the season but we could have easily been better than that," Reiff said. "There were not too many games we were out of. It was just a free throw there, a turnover there. Against Fort Osage in the Truman Tournament we showed our weaknesses -- speed and ball-handling. But we had some good wins against (Shawnee Mission) East and Olathe Northwest."

Senior guard Shaina Hunt will be enrolling at Kansas State in the fall while senior post Leslie White looks forward to joining the rowing team at the University of Washington.

Senior forward Lachelle Powell and Katy Stithem are looking forward to graduation and fellow senior Katie Smith gets ready to begin her senior campaign as a lethal bat in the powerful Northwest softball roster.

Reiff praised his eight seniors for the work they have put in for the past four years and expressed confidence that their legacy is a sound one.

"They came in after a group that had played really well," Reiff said of his graduating players. "They left the tradition in great shape. They were always competitive."