Shawnee Mission Northwest senior Mark Fancher races down the field after getting the ball during the Cougars' 41-21 loss to Lawrence Free State.

A year ago, the Free State football team's run in the postseason lasted just one game. This year, the Firebirds scored 41 unanswered points and defeated Shawnee Mission Northwest. Enlarge video 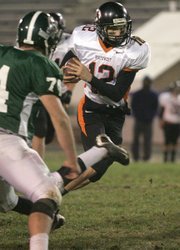 The Shawnee Mission Northwest football team fired first Friday night in the first round of the Class 6A state playoffs against Lawrence Free State at Haskell Memorial Stadium in Lawrence.

It was after that the gun jammed.

After falling behind 14-0, the Free State Firebirds rattled off 41 unanswered points, eventually downing the Cougars, 41-21, to end Northwest’s season at 7-3.

In the end, it was just too much Camren Torneden. The Firebirds’ junior quarterback accounted for more than 300 yards of total offense and five touchdowns as Free State seized command in a game that, for the first six minutes, seemed to be in the Cougars’ control.

“He’s just so dang elusive,” Northwest coach Aaron Barnett said of Torneden. “Number one, you can’t have anybody simulate him (in practice), and number two, everything goes out the window.”

The game began with the Cougars seeming to have little trouble corralling the two-headed running threat of Torneden and FSHS senior running back Chucky Hunter. The Cougars held the Firebirds to two three-and-outs and one turnover on loss of downs in Free State’s first three possessions.

Meanwhile, the Cougar offense began about as quickly as could be imagined.

On the Cougars’ third play from scrimmage, senior wideout Mark Fancher — coming from the short left side of the field — took a reverse toss and accelerated out to the right sideline for a 57-yard rushing touchdown and a 7-0 Cougar lead with 8:46 remaining in the first quarter.

After the Firebirds’ second three-and-out of the quarter gave Northwest the ball at the Cougar 49, junior quarterback Matt Nowak continued the scoring. Faking a counter play to the right, Nowak kept the ball on a quarterback read option to the left and ran 51 yards untouched to the end zone for Northwest’s second TD and a 14-0 Cougar lead.

Torneden ran 27 yards to break the ice late in the first quarter, then tossed TD passes for Keene Niemack and Preston Randolph, both good for 11 yards, in the second quarter to give Free State a 21-14 lead at the break.

Torneden did not throw a single pass in the second half. In fact, with the exception of a five-yard run by Connor Stremel on a failed fake punt, the Firebirds’ offense consisted of either Torneden or Hunter carrying the ball.

Torneden’s 61-yard pin-ball TD run on the first play of the fourth quarter was the clincher, giving the Firebirds a 35-14 bulge. Minutes later, linebacker Taylor Stuart supplied the coup de grace with a 57-yard interception return.

“They’re a good football team,” Barnett said of the Firebirds. “We had trouble putting two or three things together tonight. When we turn the ball over that just gives them extra possessions.”

The Cougars end their season 7-3, though they marked their second trip in a row to the state playoffs and their second in the three years since Barnett took the helm.

Free State (7-3) advances to play Olathe North (8-2) on Friday in the state quarterfinals.

— Chuck Woodling of the Lawrence Journal-World contributed to this report.