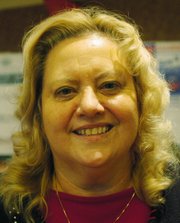 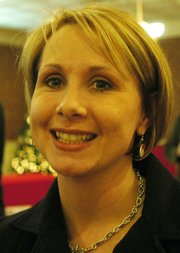 The Shawnee Chamber of Commerce recognized its top volunteers this week at its annual holiday and volunteer appreciation luncheon Wednesday.

Ambassador of the Year went to Karen Boyd of the Johnson County Christmas Bureau.

Boyd, the bureau’s representative to the chamber, works nearly full time as a volunteer for the bureau. She previously worked for Home Town Buffet and Everyday Gourmet in Shawnee.

Chamber officials said Boyd’s strengths involve interacting with businesses, schools and nonprofit organizations, adding that she steps up when needed “for any project large or small.”

Boyd, who lives in Lenexa, has been the Johnson County Christmas Bureau’s toy chairwoman for the past 19 years and participated in Junior Achievement and Read Across America. Her chamber involvement includes working on multiple committees and securing presenters for the Wednesday morning networking group.

Boyd said she juggles her load by taking one day at a time, although the things she does for others don’t feel like a job.

“I like helping people,” Boyd said. “It’s one of my big joys in life.”

The chamber established the award in 2007 to recognize a chamber volunteer who “shines with extraordinary measures of service and commitment” to the chamber.

Browning, who lives in Olathe, has served on numerous chamber committees in addition to her full-time job as an operations analyst for KCP&L. She has two sons and is nearing completion of a master’s degree in communications studies from the University of Kansas.

Chamber Chairman of the Board Tim Harmon also recognized the following members during the luncheon: