Indians edge Pioneers, advance to playoffs for first time since 2003

The Shawnee Mission North football team celebrates with the fans after beating Leavenworth, 28-24, and earning the school's first state playoff berth since 2003. 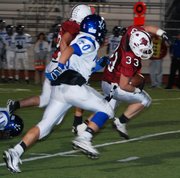 Friday night wasn’t just a step in the right direction. It was a leap.

In recent years the Indians had opportunities within reach, only to watch them slip away time after time. They had losing season after losing season to the point where it became acceptable.

Grayless demanded something different, and his team bought in. The Indians didn’t buckle during an 0-7 start to the season, and they beat Wyandotte in their second district game, setting up Friday’s showdown at North District Stadium against Leavenworth.

The winner would go to the playoffs — another opportunity within grasp.

On Friday night, the Indians reached out and grabbed the opportunity and held on for dear life. The result was a 28-24 victory that brought the student section pouring onto the field to celebrate with the team, that brought tears to some players’ eyes and brought a proud grin to Grayless’ face.

North is headed to the state playoffs for the first time since 2003.

“It’s great,” Grayless said while standing outside of a noisy North locker room. “The kids are so happy in there right now. We haven’t been there since 2003, so to get back there it’s big for our school. I think it’s big for the community at North.”

The win was anything but easy.

For a while it looked like it would be another missed chance for North as Leavenworth raced to a 14-0 lead by the end of the first quarter. The Pioneers mostly pounded the ball with running back Anthony Powell and quarterback keepers by Judson Cole. The first touchdown came midway through the first quarter when Cole nearly fell down while looking to pass, then scrambled to his right, found some space and darted 19 yards to the end zone. He then kicked the extra point for a 7-0 lead.

Powell broke a 25-yard run on the Pioneers’ next possession, and that set up a 5-yard touchdown pass from Cole to C.J. Baker. Leavenworth led 14-0 with 1:53 to go in the quarter, and the Pioneers had all of the momentum.

North finally gained some traction on offense on its ensuing possession thanks to runs of 9, 8, 21 and 4 yards by fullback Mitch Paden. Then, on the first play of the second quarter, tailback Kendall Kelly found an opening and ran 7 yards untouched to the end zone. Kyle Goodburn’s extra point pulled North within 14-7. It was the first of three unanswered scores for the Indians.

The North defense forced a punt on Leavenworth’s next possession. The wind batted the ball down and the punt netted just 15 yards. The Indians capitalized on the field position by going 43 yards on six plays. A 1-yard plunge up the middle by Paden tied the game. Then, after a Leavenworth three-and-out, North crafted a nine-play, 62-yard drive to the Pioneer 11 before coming up about three inches short on fourth down. One play later, North got the ball back when Matt Denmark intercepted a Cole pass. On the ensuing play, Kelly dashed 16 yards to the end zone, bulling over a defensive back along the way and giving the Indians a 21-14 lead with 2:01 left in the quarter. That score held up through halftime.

Leavenworth threatened to score on its first drive of the third quarter, but an interception by Mason Perez briefly halted the Pioneers. A North three-and-out gave the ball back to LHS, however, and this time the Pioneers capitalized. They marched 69 yards on nine plays — including a fake punt — and tied the game on a 29-yard touchdown run by Powell with 3:58 left in the third quarter.

After swapping unsuccessful drives, North appeared to be on its way for a go-ahead score as it pounded the ball for positive yardage on nine straight plays in the fourth quarter. A fumble by Brock Burrows at the Leavenworth 35 halted the drive, however. The Pioneers attacked on the next play as Cole connected with wide receiver Alec Zeck on a fly pattern down the left sideline for a 45-yard pickup. Four plays later, Cole rolled out to his right for a QB keeper and appeared to be headed for the end zone, but Burrows — the same player who moments earlier coughed up the ball — tracked him down for a touchdown-saving tackle and a 2-yard loss. Leavenworth ultimately settled for a 30-yard field goal by Cole that gave the Pioneers a 24-21 lead with 4:48 left in the game.

Kelly took a handoff on an inside reverse on North’s first play from scrimmage, popped to the outside and sprinted 69 yards to the end zone for a touchdown and a 28-24 lead.

The North defense then forced the Pioneers into a three-and-out and a punt. From there, the Indians appeared poised to run out the clock and punch their playoff ticket, but a missed block with under a minute to go allowed a Leavenworth linebacker to surge through and force a fumble from Paden. That gave the Pioneers the ball at the North 25 with 48 seconds to go.

Again, recent history stared the Indians in the eyes as Leavenworth was in striking distance. Again, the Indians rose up. The Pioneers picked up 13 yards on the first play to the North 12-yard line. Then came an incomplete pass, a completion for a 2-yard loss, a run by Powell for a 6-yard gain to the North 8, and finally an incomplete pass to the end zone on fourth down that was defended by Denmark. The ball fell to the turf with 1.1 seconds to go.

The North defense bent but didn’t break. The Indians didn’t let the opportunity slip away.

Moments later, Goodburn took a knee, the clock ran out and history was made as the down-and-out Indians secured their second straight victory and a berth in the playoffs.

“It was killing me those last couple minutes,” Goodburn said. “But I’m just so glad we finally made it this year. Seven years … it’s been a long time. I’m just glad we made it, and I’m ready to work next week.”