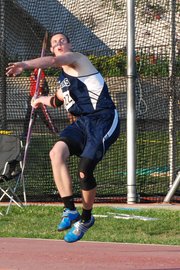 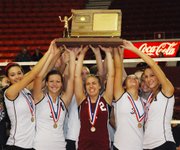 Yes, state championships piled up in 2011.

Six team state championships were earned by local schools this year, in addition to a few runner-up finishes and individual state titles.

On the track, the soccer field, the baseball field or the cross country course, the location rarely mattered. If a sport was being played, it seemed a local squad was in the title hunt.

Nobody reaped a larger trophy haul in 2011 than St. James Academy. The Thunder — in just the sixth year of St. James’ existence — brought home three championships and three second-place trophies. Some were expected, such as the St. James volleyball team winning its fourth straight Class 4A state title, and others — like the Thunder baseball team’s late-season surge — may have caught people by surprise.

St. James didn’t have exclusive rights to state titles, however.

Of all the trophies won in 2011, three are particularly memorable to me — and they all come from Northwest.

It was a truly collective effort that allowed the Northwest boys track team to capture the Class 6A state championship in late May. More than one or two standouts who could pile up points for the Cougars, they were a perfect blend of stars, steady hands and role runners who all chipped in where necessary to get the job done.

Distance races? Northwest was stocked. Sprints and hurdles? Good there, too. Throws? Check. How about the pole vault? Got that too.

While the Cougars were a talented bunch, what impressed me even more was their ability to see the big picture. They had their sights set on a title all year, and they understood the importance of each member’s contributions. Distance runners supported jumpers. Sprinters cheered for throwers. Runners celebrated sixth-place finishes as much as victories, because every individual placing helped the team. Everybody was willing to go the extra mile. In fact, that was exemplified in the final race of the season — the 1,600-meter relay — when SMNW already had the state title wrapped up, but the Cougars didn’t use the relay as a victory lap. Instead, they raced with fury, and David Fancher’s lean at the finish line gave the Cougars a first-place finish by .01 ahead of Wichita Northwest.

The other trophies came at state cross country in October.

First, there were the Cougar girls. After playing second fiddle to the SMNW boys for decades (the boys have won 15 titles in the past 18 years), the Northwest girls burst through the shadows and surged to the top in 2011. This was a season four years in the making since seniors Jessica Johnson, Sarah Barnes and Sarah Crawford entered the program. The program sought out depth during the past few years, and this season the Cougars found it. They started the season strong and steadily got better before winning the state championship by 24 points.

Meanwhile, the Northwest boys’ season was memorable for a much different reason. During their reign of dominance the two nontitle seasons of the previous 17 years ended with second- or third-place state plaques. This was the year the Cougars were supposed to fall from the podium. Their chances for a top finish at state didn’t look good after taking fourth at the Sunflower League Championships, and the odds still weren’t in their favor after a third-place finish at regionals.

In the end, however, the Cougars’ season-long journey to establish consistency paid off in the final race and they surged to a second-place finish.

It wasn’t a title, but it the runner-up finish had to be one of the most satisfying coaching moments of longtime SMNW coach Van Rose’s career — especially when coupled with the girls’ state championship.

Yes, 2011 was a great year for sports in Shawnee. There were many memorable moments, and plenty of admirable accomplishments. The bar has been set high for local schools looking ahead to 2012.