Tonganoxie's Evan Stilgenbauer and Maranatha's Caleb Henderson battle for possession of the ball during the first half of the Class 4-1A regional championship game.

Overland Park — In a game where both Maranatha Academy and Tonganoxie constantly made big plays, their Class 4-1A regional championship game fittingly ended with a player from both squad stepping up. 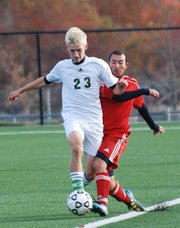 With THS holding a one-goal advantage in the penalty kick shootout, Maranatha senior midfielder Luke Miller stepped up and drilled his shot on target. With the ball seemingly destined for the back of the net, Tonganoxie junior goalkeeper Keaton Truesdell blocked its path and — in doing so — lifted the Chieftains into the state quarterfinals.

Tonganoxie and Maranatha played to a 1-1 tie through regulation and four overtimes before the Chieftains prevailed 3-2 on penalty kicks Thursday afternoon at the Overland Park Soccer Complex.

It was a dramatic ending to a game where neither team ever gained much of an edge.

“We have six seniors that I’m absolutely proud of, and to go out in a game like that is the greatest way to go out,” Maranatha coach Matt Gordon said of the postseason thriller.

The first half was a struggle for momentum. Each team had five shots during the first 40 minutes, Tonganoxie’s coming early and Maranatha’s coming late. All the while, physical play dominated in the midfield as both sides tried unsuccessfully to string enough pass combinations together to get good looks at the goal.

Maranatha’s best look of the half came thanks to a misplayed ball by the THS defense. On an attempt to reverse the field, Maranatha junior forward Connor Emberlin jumped into the passing lane, stole the ball and put a shot on frame that was snared by Truesdell.

Tonganoxie’s best chance of the half came in the 33rd minute when senior Matthew Briggs fired a free kick from 35 yards out into the Maranatha box where teammate Evan Stilgenbauer, a sophomore, put a shot on goal that Eagles senior goalkeeper Robby Thomas gobbled up.

The game was scoreless at halftime.

Tonganoxie nearly scored in the 59th minute when junior Matthew Saathoff sent a cross to junior John Lean at the back post, but Thomas was there to make the save.

Finally, the Eagles broke through in the 62nd minute when their best offensive combination of the game resulted in a goal. Emberlin worked the ball into the right corner and fed a through ball to senior Regan Houchin in the middle. Houchin made a quick pass to a charging Miller who buried a goal from close range.

The Eagles’ lead lasted 54 seconds. Tonganoxie quickly countered when Stilgenbauer headed home a goal at the back post and tied the game at 1-1.

An apparent ankle injury to senior defender Josh Wirtz had the Eagles’ coaches considering playing for penalty kicks as they shifted formations from a 4-3-3 to a more defensive 4-4-2, but the Eagles still created scoring opportunities.

Emberlin had two breakaway chances, but the state’s leading scorer was denied by Truesdell.

“Their keeper made two of his breakaway saves on Connor, and Caleb (Henderson) had a breakaway that went just over the bar, and we had two corner kicks that just missed,” Gordon said. “Their keeper had fantastic saves.”

Both squads had numerous chances to score the go-ahead goal, but both Truesdell and Thomas made multiple athletic saves to keep the game tied and send it to a shootout.

Maranatha played catch-up throughout the shootout. Emberlin led off and drilled the right post. Saathoff followed with a shot into the bottom right corner and THS went up 1-0. Maranatha senior Nathan Sheahan then made his kick into the bottom left corner, and Tonganoxie senior Marcus Titterington sent his kick over the crossbar.

Truesdell saved Maranatha senior Joseph Banning’s shot, and then THS senior Tyler Bartholomew drilled his into the upper right corner for a 2-1 Chieftain lead. Houchin evened the shootout when he made his shot into the bottom right corner, but Briggs quickly gave the Chieftains a 3-2 edge when he scored into the bottom left corner. Finally, Truesdell blocked Miller’s kick and secured the victory for the Chieftains.

Maranatha ends its season with an 11-7-1 record. Tonganoxie (11-6-1) advances to play Tuesday in the state quarterfinals.