Since St. James Academy opened in 2005, the school has won multiple state titles across several sports.

For the football program, however, creeping toward the .500 mark has been all it could muster. 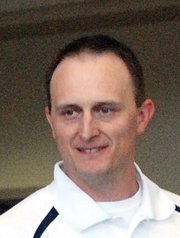 Entering 2012 after losing only five seniors from last year’s team might have the Thunder finally ready to break through that barrier and make it into the playoffs.

The work for St. James Academy started over the summer when second-year coach Tom Radke asked his players to attend 30 days of strength and conditioning sessions.

“The guys have been working their tails off,” Radke said. “The coaches and I keep trying to find things to get them in better shape.”

That commitment has lacked in the past, but with this year’s large turnout, Radke has seen improvement from his first year at the helm.

“We’ve been working on getting our endurance up,” Radke said. “We’re working on mental toughness along with pounding the weights and doing running.”

After a fast start last year with three straight victories, the Thunder dropped five of its last six games, including a 40-34 loss to De Soto in the season finale.

The key for the Thunder to be successful with its schedule is honing in on defending and executing the running game.

Fortunately for St. James Academy, it returns junior Jake Bade, a varsity running back, as the focal point for the team. Radke said he rushed for around 850 yards last year.

On defense, seniors Matt Bierbaum and Tom Huppe will be the leaders in the secondary.

“This year it’s like re-running through everything and that’s a nice luxury at the beginning of the year,” Bierbaum said.

Senior defensive back Tanner Hinderliter also appears to be in the mix for helping the Thunder bolster its secondary as it seeks to improve from its 4-5 record from 2011.

“He really expects a lot out of the seniors to keep the program going and start a new tradition,” Hinderliter said.

Another key for St. James Academy is having the entire offensive and defensive lines returning. Not having to develop that chemistry on the line will be a major step forward once training camp is in full swing.

“We’re going to have to set a really high tone for each game,” Feist said.

Look for seniors Zach McGuff, Chris Gomez and Jake Whitman to also make an impact in moving the pile.

Senior quarterback Jansen Keyes was tapped as the signal caller for the team once again and Radke has confidence that he can lead the Thunder throughout the season.

At this point, the Thunder knows this is a chance to break through and possibly hang a banner next to some of the other ones already accumulated.

“We only have one goal: to win the state championship just like everyone else,” Radke said. “We always talk about improving every day and finishing every play, but if we don’t play on that Saturday this year, I’ll be very disappointed.”