Cracking down: Officer with Shawnee’s most DUI arrests knows how to spot drunk drivers

Officer Rusty Morton made more DUI arrests in 2011 than any other officer in the Shawnee Police Department. He was recently honored with an award from Mothers Against Drunk Driving.

So you’ve had a few too many at the bar, and you know it.

You figure, instead of taking a main thoroughfare home, you’ll creep along the side roads and avoid the police, right?

Officer Rusty Morton has seen your trick — and many others — often. And if he spots you, there’s a good chance that you’ll be winding down your evening in jail and landing a DUI on your record.

Morton made 35 DUI arrests in 2011, accounting for 17 percent of Shawnee’s 210 DUI arrests that year. In January, the Cass-Heartland chapter of Mothers Against Drunk Driving gave him an achievement award for his efforts detecting and apprehending impaired drivers.

The next-highest number of arrests by an individual Shawnee officer was about 20, said Sgt. Jim Baker, who leads Shawnee’s traffic unit. Baker said Morton’s count was high for a patrol officer. 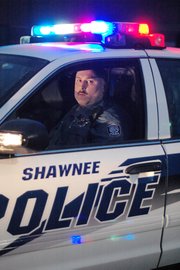 Officer Rusty Morton made more DUI arrests in 2011 than any other officer in the Shawnee Police Department. He was recently honored with an award from Mothers Against Drunk Driving.

Morton, an 11-year Shawnee officer who lives in Gardner with his wife and two children, prefers working the overnight shift, from 10:15 p.m. to 6:30 a.m., especially on Friday and Saturday nights. In between other calls, he keeps his eyes peeled for impaired drivers.

On New Year’s Eve, Morton had just flipped off his emergency lights and was pulling away from a traffic stop on Shawnee Mission Parkway when he saw a car coming toward him in the wrong lane on a divided portion of the Parkway, near Woodland Drive.

Morton said his adrenaline kicked in.

“You just want to get it stopped, whatever the reason may be,” Morton said. “Sure enough, she was intoxicated. She had no idea she was going the wrong way.”

Morton said he makes it a policy not to “sit on” bars. There are too many things a defense attorney could argue (most notably, he said, that if the suspect was noticeably intoxicated, the officer should have stopped him before he got in the car).

Instead, he watches for traffic infractions that could indicate a driver is impaired.

“Most don’t like to travel the main road,” Morton said. “They know they’re intoxicated, they’re going to travel side roads to avoid being caught by us. Others just think they’re OK to drive.”

Morton said the most common infractions he sees are wide turns and crossing the center line. He said he usually tails a driver long enough to count three or four touches on the dividing line before pulling him over.

During a stop, Morton smells for alcohol and looks for watery, bloodshot eyes, which trigger him to proceed with alphabet or counting tests and, possibly, a field sobriety test.

Morton said he’s methodical. He’s made a lot of DUI arrests, and he knows what it takes to get them to stand up in court.

When it comes to defense attorneys, Morton said, “I try to beat them to the punch.”

“To me, it’s a great compliment when I go into these hearings and they say, ‘Hey, I’ve got nothing to argue.’”

Morton said he tells designated drivers that he appreciates what they’re doing. When he confirms they’re sober, he said, he’s been known to let them off the hook for whatever minor traffic infraction that prompted the stop.

Nov. 5, 1988, a drunk driver caused a wreck that killed one of Morton’s cousins in the Missouri bootheel, where he was raised.

Morton said he was about to turn 16, and his cousin was several years older. The culprit was a “career drunk,” Morton said, so much so that his father was caught smuggling alcohol to him even after he was imprisoned.

In the years since, Morton has seen how his cousin’s death affected her family. It’s a big reason he’s carved out a niche making DUI arrests in his previous job, as an Army police officer at Fort Riley, and his current job, as a patrol officer in Shawnee.

“Our main goal is making sure people are getting home safely and they’re not hurting themselves, or somebody else,” Morton said.