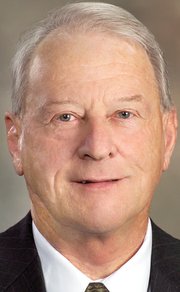 “I feel that the Speaker’s violations will make it extremely difficult to arrive at legislation that is in the best interest of our constituents when it is so compromised from the start,” Donohoe said in the email to all House Republicans.

He said the House Republican caucus, which has a 92-33 advantage over Democrats, should examine whether O’Neal is the leader they should have.

Asked about the email as the 2012 session started Monday, O’Neal said, “It’s not worth commenting on it.”

Donohoe said most of his colleagues have remained quiet about the email.

He said he wrote it because he was “sick and tired” of what he said was inappropriate behavior by O’Neal.

In the email, Donohoe cites several of the controversies that have surrounded O’Neal in recent years, including the hiring of his wife and his representation in a lawsuit against the state.

In 2010, an investigative committee dismissed a misconduct complaint against O’Neal that was brought by Democrats after O’Neal filed a lawsuit on behalf of some businesses, trade groups and insurance funds against the state. But the committee did urge repeal of the law that allowed O’Neal to file the lawsuit.

In 2009, the Kansas Governmental Ethics Commission ruled that O’Neal did not violate state ethics laws when another leading lawmaker hired O’Neal’s wife, Cindy, as a legislative aide.

O’Neal stirred up more controversy last week. O’Neal was criticized for forwarding an email that referred to first lady Michelle Obama as “Mrs. YoMama.” O’Neal later apologized, saying he forwarded the email too quickly and missed the “Mrs. YoMama” reference.

Earlier, O’Neal forwarded an email that referred to President Barack Obama and a Bible verse that says “Let his days be few and brief.” His spokeswoman said that the email was referring to the president’s days in office.

This story was first published at ljworld.com, homepage of the Lawrence Journal-World.