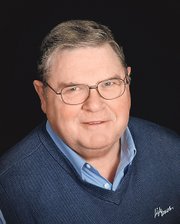 Not owning any Hallmark stock, Mel Carney never had much use for Christmas cards.

So following the deaths of his father in 1988 and his eldest brother the following year, the 70-year-old Shawnee resident started sending loved ones holiday missives of a more meaningful ilk.

Realizing that time threatened to bury knowledge of his Millersburg, Iowa, farm roots along with family members, Carney sent out his first Christmas letter to friends and kin in 1989. It told of a Christmas play at the local schoolhouse, followed by the arrival in uptown Millersburg of Santa Claus — “the only Santa Claus you saw” — via a horse-drawn sleigh.

More tales of those simpler times, plus installments about later experiences in Vietnam and Shawnee, followed for the next 21 years. And now, they have been published as a book, “Tomorrow’s Road Home,” available in printed and online formats via melcarney.com.

Largely dedicated to Carney’s childhood memories of Iowa farm life, the letters, and now the book, became a way to connect the next generation with a childhood where hard work, faith and close family bonds created the backbone that supports Carney yet today, he said.

“Everything you did on the farm was about being self-sufficient,” Carney said. “You were really a family, and you were a working family.”

He recalled starting to do his part as a 4- or 5-year-old boy by gathering eggs, feeding the chickens and fetching kindling for the wood stove.

“It harkens back to another time, when convenience was a full box of kindling,” he said of the book.

But while folks are now reading his childhood memories on Kindles, Carney added, he knows many younger readers don’t have a clue what farmhouse kindling was: corncobs, chunks of wood and a little coal.

In addition to instilling values like thrift and a strong work ethic in him, Carney said, his rural upbringing bestowed wondrous images, many of them shared in the book.

Arising at 4:30 a.m. one Christmas morning, when he was in the ninth or 10th grade, Carney recalled, his father dispatched him to the barn to check on a milk cow on the brink of giving birth.

“I remember the barn door squeaking open, and here was this cow with a new calf, still steaming,” he said. “I grabbed an old towel, cleaned it up and got it to start nursing. About this time, the sun was starting come through a window in the barn, making everything hazy and bright. It was a wonderful pastoral scene — new life on Christmas morning for the calf and new life for the farm. I mean, that’s how we made our living. We had about 80 head of Black Angus stock cattle.”

Carney, a computer software salesman, never planned to become a farmer himself. Instead, he majored in theater at Notre Dame College in St. Louis and “was planning on being an actor until life and reality got in the way.”

He’s always had an artistic side, he said, and as a youth, his tendency to let his imagination run wild meant that farm chores sometimes took him a lot longer than necessary to accomplish.

“By brother didn’t like me to go out after the cows because it would take me forever,” Carney explained. “Once, after my grandmother had given me a copy of ‘Robinson Crusoe,’ I went out to get the cows. And on the way, I discovered a small stream that ran through the farm had split, forming an island. So there I lay, on my own island, reading ‘Robinson Crusoe’ in the middle of Iowa.”

According to Carney, all the credit, or blame, for him compiling his boyhood tales into book form goes to Marilyn Breneman, whom he knew through their years of efforts for the Shawnee Historical Society. Carney, once honored as the society’s Pioneer of the Year for his efforts to improve Old Shawnee Town (now Shawnee Town 1929), eventually put Breneman on his Christmas letter list. And she not only told him he should publish the stories as a book, “she insisted on it,” he said.

That was around 2000, Carney said, and during the next several years he investigating traditional publishing avenues. Ultimately, however, he chose the self-publishing route through a service called smashwords.com.

Smashword.com made the book available to people with Kindles and other e-readers at no charge to Carney. But between having the book professionally edited and getting 100 copies printed for friends who’ve been clamoring for a hard-copy version, Carney has spent about $2,000 on the book.

Thus, he’s now looking for a traditional publisher for a new book he’s writing. It’s a novel about a soldier and a life’s worth of experiences leading up to one critical night in Vietnam.

Like the fictional soldier, Carney was molded by a slow parade of barefoot summers and planting seasons, during which neighbors helped neighbors put in crops whenever necessary.

“That’s just how you were raised, to help one another,” Carney said. “But you weren’t raised too fast; kids were given a chance to grow up slowly.”