A ribbon-cutting ceremony will be conducted at 11 a.m., and the guided interpretative tours will continue for two hours after the 2 p.m. close of the grand opening festivities. 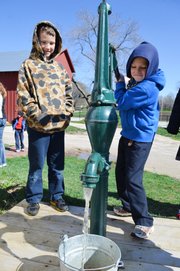 Colin Schuster, right, pumps water from a cistern at the Shawnee Town 1929 Truck Farm as fellow third-grader Hunter Brennan looks on during a Friday morning field trip to the site by Our Lady of the Presentation Catholic School students in Lee's Summit, Mo.

Bob Kirkpatrick, a volunteer at Shawnee Town 1929, was posted at chicken coop in the museum's farmstead during a living-history program for schoolchildren last Friday.

Testing their washboard skills, Abby Leardi, left, and Ellie Batliner, were among third-graders at Our Lady of the Presentation Catholic School in Lee's Summit, Mo., who toured the Shawnee Town 1929 Truck Farm during a field trip Friday. 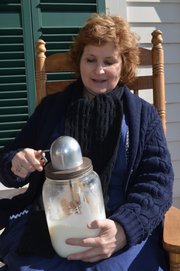 Sharon Uhler, curator of education at Shawnee Town 1929, churns butter last Friday on the front porch the living-history museum's farmhouse, part of the Shawnee Town 1929 Truck Farm that will be hosting a grand opening on May 4.

A homegrown tourist attraction capable of transporting visitors back to agrarian life in the 1920s will be unveiled during the grand opening of the Shawnee Town 1929 Truck Farm from 10 a.m. to 2 p.m. Saturday, May 4.

The working truck farm, together with Shawnee Town 1929’s adjacent farm town structures, make up a living-history museum that was born in 1966 as Old Shawnee Town, a Midwestern frontier-focused attraction. Located at 11501 W. 57th St., the museum was transferred to the city by its founders, the Shawnee Historical Society (now Friends of Shawnee Town), in 1997. And as a result of a 2004 master plan for the site, it has been redeveloped to interpret Shawnee’s 1920s history as a thriving truck-farming community.

“Regular farmers with bigger operations were feeling the depression all through the ’20s, because they no longer had a big market for their crops after World War I ended,” said Charlie Pautler, who was hired as Shawnee Town 1929’s director last year. “But the truck farms were smaller, so Shawnee didn’t begin to feel the depression until 1931.”

During the 1920s, Belgian and other immigrant families in this area prospered by raising crops on small farmsteads like the one recreated at Shawnee Town 1929 and trucking the produce to the city market in Kansas City, Mo. The authentic buildings within the Shawnee Town 1929 Truck Farm have all stood completed or relocated for a couple of years. But according to Pautler, the grand opening had to wait until the buildings were fully furnished.

“Now the farmhouse is furnished, the tool shed has tools in it, the garage has a 1927 Nash in it, and the chicken house has a full complement of chickens,” he said.

Shannon Hsu, the museum’s curator of collections, and Anne-Marie Zarrelli, collections assistant, led the effort to find authentic furnishings for the buildings and get them cleaned, repaired and installed. And they recently completed the job by getting the two-story farmhouse, once Old Shawnee Town’s Hart House, decked out with trappings of the ’20s.

“The farmhouse was the last piece of the puzzle and the most labor-intensive,” Pautler said, noting that the home’s bedroom, sitting room and kitchen have been transformed with artifacts.

Among them is a functioning Waterford wood stove imported from Ireland, said Sharon Uhler, Shawnee Town 1929’s curator of education. Uhler and Heather Gilpin, the museum’s volunteer coordinator, have been training interpreters to cook on the stove and otherwise make 1920s farmstead history come to life for the May 4 grand opening crowds and subsequent living-history events.

Pautler was known for his ability to build living-history programming in his previous job as site manager for the Charles A. Lindbergh Historic Site in Little Falls, Minn., and he’s doing the same at Shawnee Town 1929.

“We’ve got a healthy complement of school groups coming to visit us this spring,” Pautler said, “and we’ve developed some new living-history programs for them.”

Living-history programming focused on both the farmstead and farm town portions of the museum are scheduled to continue full force over the summer, fueled by a contingent of 100 Shawnee Town 1929 volunteers, including about 20 active living-history interpreters.

But right now, the focus is on the farmstead’s grand opening, through which Pautler hopes to “attract a big crowd and whet visitors’ appetites to bring their families back” to Shawnee Town 1929.

Toward those ends, the museum has used a grant from the Johnson County Heritage Trust Fund to retain the Margaret J. Blankers Public Relations Group, which is helping to spread the word about the grand opening. In addition to sending press releases about the event throughout the Midwest, the agency has booked Pautler for interviews with eight to 10 print and electronic media outlets.

Through good promotion and programming, Pautler said, he believes Shawnee Town 1929, which attracted 137,311 visitors last year, could grow into a national attraction by the time the 2020s roll around.

“We start with a Shawnee story,” he said, “but it’s not just Shawnee specific. We’re trying to appeal to anyone interested in 1920s history, which we’ll do by focusing on a few really cool aspects, like truck farming and popular culture, which includes art, theater and music.”

Hopefully, Pautler said, Hollywood will respond to the approaching centennial of the 1920s with more films about the era, providing Shawnee Town 1929 with the kind of bump the Negro Leagues Baseball Museum in Kansas City, Mo., is enjoying following the recent release of “42,” the Jackie Robinson story.

Shawnee Town 1929 also is expecting a boost from continuing development. With the completion of the truck farm — which includes the farmhouse, chicken coop, a barn, market shed, garage, root cellar and other structures — attention soon will turn to the museum’s second and final phase: the farm town.

During the May 4 grand opening, tours off the farm town’s three newest structures — the Bousman Barber Shop, Yotz Typewriter Repair Shop and City Jail — will be offered.

Based on actual structures that once stood on or near Shawnee’s actual town square a few blocks away, the farm town soon will feature two more additions: Garrett’s Grocery and a furniture and undertaking establishment.

Ultimately, Pautler said, the entrance of Shawnee Town 1929 will be moved to the Johnson Drive side of the museum grounds, where a new visitors center is envisioned. The 57th Street side will be developed with a string of stone buildings that will replicate businesses that stood on the south side of the Shawnee square in 1929: the Shawnee State Savings Bank, Tom Davis Dry Goods Store, Goddard’s Electric Store and Heaton’s Drug Store, which will feature a working soda fountain.

Later additions will include replicas of the Fisher Chevrolet dealership, a Phillips 66 gas station with a volunteer fire station n back and town doctor Tom Sullivan’s house.