Dr. Kimberly Flaming shows off one of about a dozen long needles she uses in each acupuncture therapy at her clinic in western Shawnee.

Shawnee — If needles make you squeamish, look away.

Dr. Kimberly Flaming traces her trained fingers down Patricia Fraker’s neck, searching for just the right spot to insert a sharp, 4-inch-long piece of metal. Once she’s stuck Fraker with a dozen of them, Flaming connects the needles with colorful wires that run low-level electrical current directly into her patient’s body.

It looks like a crude torture device, but it doesn’t hurt. In fact, the opposite is true.

Over the past few months, the pair have made a routine of the poking and prickling at Shawnee Chiropractic & Acupuncture Clinic, where Fraker is seeking relief in the aftermath of a rare ailment — West Nile virus, which attacked and damaged her nervous system. 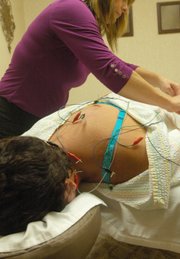 “I can’t raise my right arm above my head, so my left side overcompensates,” Fraker says. “I have a lot of pain in my shoulder and my hip from not being able to use the right side of my body.”

On this visit, she tells Flaming that her left hand and thumb have been extra painful recently.

“I can feel that,” Flaming says, and sticks a needle there, too.

Twenty-seven people in Johnson County suffered from West Nile in 2012, according to figures from the Johnson County Department of Health and Environment. Almost half of those cases, 13, were reported in August.

Fraker’s was among them. She contracted the mosquito-borne illness that causes fever, headaches, fatigue and even death, last fall.

“It came on like a bad flu, with a rash,” Fraker recalls. “At first I thought it was an allergic reaction. I go to CVS and they’re like, ‘We think something’s really wrong with you.’”

Fraker visited her primary care physician, who told her to keep a close eye on the rash and go to the emergency room if things got worse. She also paid a visit to Flaming’s office, where she was already a chiropractic client.

“Kim noticed a bug bite on my back, and she said, ‘Something’s not right here.’”

So Fraker went to the ER at Shawnee Mission Outpatient Pavilion at Prairie Star Parkway in Lenexa. Doctors there told her they’d need to send out for a West Nile panel.

“I’m just freaking out,” Fraker says, “and they come back and say, ‘We need to do a spinal tap.’”

That test revealed meningitis, which often shows up first in West Nile cases. Doctors referred Fraker to a neurologist at Shawnee Mission Medical Center, who made the final diagnosis.

“I barely remember about three days of my life,” she says. “I couldn’t keep anything down, I was weak.”

No comprehensive treatment currently exists for West Nile patients, so instead of attacking the virus, doctors address the symptoms. Fraker was put on IV fluids and respiratory support, and closely monitored as West Nile wreaked havoc on her nervous system. She spent weeks in inpatient and then outpatient physical therapy to try to regain full motor function in the right side of her body.

“I just feel very lucky that those doctors out there caught it when they did,” Fraker says.

Flaming has been practicing at Shawnee Chiropractic & Acupuncture Clinic since 2005. She’s a fourth-generation chiropractor. Her great-grandmother learned the trade in 1922.

Acupuncture is comparatively new to the family. Only Flaming and her father ever mastered it.

“As a chiropractic doctor in Kansas,” she says, “you do a 100-hour acupuncture course.” 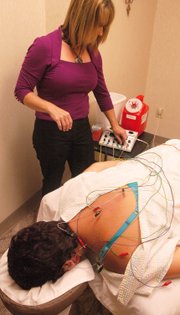 While many of her acupuncture patients, like Fraker, seek pain management, Flaming says it’s effective for a broad swath of chronic conditions, even infertility. And it’s good for seniors with osteoporoses who can’t undergo routine chiropractic adjustment.

“They’re long needles, they look long, but they don’t go in very far,” Flaming says, turning a seemingly lethal stick of metal in the light. “There are 12 meridians that run through the body, and they correlate with organs. That’s what you’re aiming for.

“We don’t totally understand how the neural pathways of the body work, we just know there’s way more involvement than we could ever, ever know.”

Flaming’s acupuncture treatments last anywhere from 20 minutes, with electro-stimulation, to 45. Her patients lie facedown in a dark room while the needles do their thing.

“You want to create a relaxing environment,” Flaming says. “So much of it is about mentality.”

Flaming performs as many as four acupuncture treatments per day. They run about $30 apiece, and some health insurers cover a portion of the cost. She’s always taking on new patients.

Most of them, like Fraker, also receive chiropractic care.

“In Patricia’s case, we added acupuncture because her muscles were so tight trying to create new balances,” Flaming says. “When I treat this lady, just by feeling her muscle tissue, I can tell she’s going to feel better.”

According to the Centers for Disease Control & Prevention, the most effective way to avoid West Nile virus is to avoid mosquito bites:

• When weather permits, wear long sleeves, long pants and socks when outdoors. Mosquitoes may bite through thin clothing, so spraying clothes with repellent containing permethrin or another EPA-registered repellent will give extra protection.

• Take extra care during peak mosquito biting hours, from dusk to dawn, or consider avoiding outdoor activities during these times.