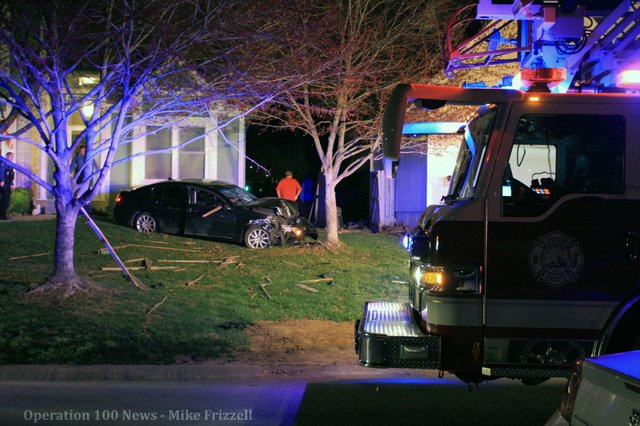 A car crashed through two fences and sideswiped a house before crashing head-on into a tree.

A car crashed through two fences and sideswiped a house before crashing head-on into a tree.

Shawnee — A 32-year-old Lenexa man was injured Monday morning when he lost control of his vehicle along Blackfish Parkway and brushed against a house before colliding head-on with a tree, authorities said.

The accident occurred around 12:40 a.m. as Matthew Thomas Leeper was traveling west on Blackfish Parkway near Pflumm Road. Leeper's Lexus sedan jumped a curb and drove through a yard on the south side of Blackfish, narrowly missing a wooden privacy fence.

Tire marks in the grass show the car then crossed both lanes of Blackfish to the north side grass, where it ricocheted off of a ground level electrical transformer, plowed through two sides of a wooden privacy fence, scraped along the side of a home's foundation and struck a tree.

Officers at the scene said Leeper was transported to an area hospital with a serious head injury.

No residents were injured and the home that the car struck did not sustain any structural damage.

Shawnee firefighters stood by with the damaged ground transformer until KCP&L could arrive to survey the damage. Several large wires could be seen sticking out of the ground.

Additional photos of the crash scene can be found on the Operation 100 News website.

In 2012, a vehicle crashed through a privacy fence of a home at Blackfish Parkway and Park Street. The residents of another home on Blackfish Parkway have replaced their mailbox at least twice due to vehicles leaving the road and crashing into it.