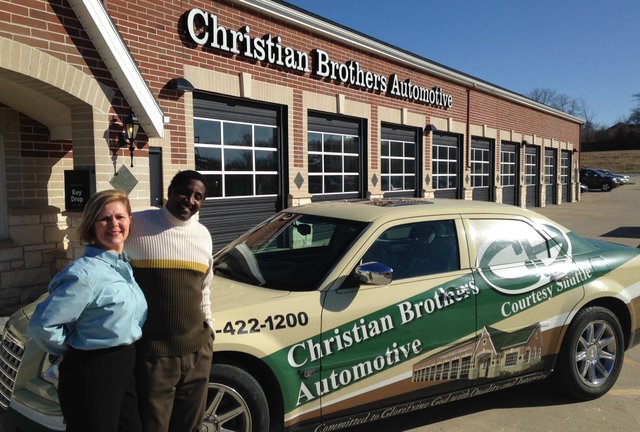 Scott and Tammie Green own and operate Christian Brothers Automotive in Shawnee.

The Greens' business philosophy is simple.

Honesty, integrity and giving all the glory to God.

“With those three things as a recipe, you can never go wrong,” said Scott Green, who along with his wife, Tammie, owns and operate Christian Brothers Automotive, 22240 Midland Drive. The couple purchased the business back in January 2013.

With a name like Christian Brothers, it should come as no surprise the company headquartered in Houston is faith-based.

“Every franchise is locally owned and operated by a person who follows Christ,” Tammie said. “Someone who not only talks the talk, but walks the walk.”

The Greens' road to owning Christian Brothers Automotive was filled with its share of detours along the way.

The first being that the Greens, who were high school sweet hearts back in Virginia, had drifted apart following graduation and went their separate ways for 22 years.

It wasn't until Scott found a picture of Tammie in a photo album that he decided to contact her in an effort to rekindle their relationship.

“Long story short, he called me and we dated long-distance, then got married eight years ago,” she said.

Following their marriage, Scott managed the Shawnee Tires Plus store, while Tammie continued to work a corporate job.

Things were going along smoothly until Tammie was laid off in 2012.

“When I got laid off, it gave us the opportunity to buy the franchise,” she said.

While the Greens live in Shawnee, since a Christian Brothers was already there, they decided to build one in Leawood instead.

With the Greens already committed to the Leawood location, Scott said they received an unexpected call from the company saying the owner of the Shawnee shop was willing to sell.

“It was perfect timing,” Scott said, adding it didn't take them long to sign on the dotted line.

Since then, they say, their focus has been on doing what is right for the customer.

“It's not about that one-time transaction,” Tammie said. “It's about helping people take care of their vehicle for however long they plan to keep it.”

Some might be surprised to learn neither of the Greens are mechanics.

“I've always had a love of cars,” Scott said, reminiscing back to his days running a tire and rims shop in Virginia.

However, that doesn't mean the Greens aren't knowledgeable about what makes a good automotive repair shop.

“You have to have the right staff that has the same values that you do,” Tammie said, adding all their mechanics have their automotive service excellence certifications. “We really have a great team that works together to achieve our goals."

One of the couple's main goals is to get every vehicle returned to their customers by day's end.

“We can't do that with every job, but that's our goal,” Tammie said.

Building relationships with the community is job No. 1 for the Greens.

In October, the Greens offer free oil changes to single mothers and widows. In the spring, they offer a free car-care class where mechanics volunteer their time to educate the public.

The community service day will feature a supervised bounce house for children, and Shawnee police officers who will be on hand to ensure car seats are properly installed.

“This is just another way we try and give back to the community,” Tammie said. “Last year we had about 15 people, this year I'm hoping for 50 to 100.