Mayor Michelle Distler stands with other recipients of the 2015 Secretary of Defense Freedom Award at the Pentagon on Friday. 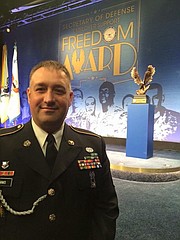 Army Reservist Sgt. 1st Class and Shawnee firefighter Douglas Simms stands in front of the the Freedom Award at the Pentagon last week. Simms nominated Shawnee for the award earlier this year.

The city of Shawnee was recognized at the Pentagon on Friday with the 2015 Secretary of Defense Freedom Award.

Mayor Michelle Distler, Shawnee firefighter Douglas Simms and Human Resources Director Liz Crawford made the trip to Arlington County, Virginia, to accept the award, given to employers for their support of National Guard and Reserve employees. Shawnee was selected as one of the top 30 employers from a pool of 2,960 nominations submitted earlier this year by National Guard and Reserve service members.

The prestigious award is the highest honor in a series of Department of Defense employer awards that include the Patriot Award, the Above and Beyond Award and the Pro Patria Award.

“It was such an honor to receive the award on behalf of our city for all of the great things the city does to support our military employees,” Distler said. “Being in the presence of those who serve is always awe inspiring and patriotic, and I am so proud to be a citizen of this great county and mayor of this great city.”

Distler stood on stage with several other recipients and received the city’s award. The recipients were scheduled to meet President Barack Obama on Thursday, but the President was not able to meet them because a scheduling conflict.

Shawnee was recognized for its full line of benefits offered to military employees as well as the city’s reintegration program that eases the transition back to home life after deployment for military personnel. The city also offers a program in which fire department employees can help the families of the military members with snow removal and lawn maintenance while their loved one is deployed.

The city of Shawnee was nominated for the award earlier this year by Army Reservist Sgt. 1st Class Simms, who is assigned to the 325th Combat Support Hospital. Together with Crawford, they sent the application info to the Department of Defense for consideration and were notified that the city was a finalist in April.

Walt Frederick, state chairman for Employer Support of the Guard and Reserve, said at the time that “the city of Shawnee has been outstanding in supporting our guardsman and reserves," and knew that the city had a good chance to win the award.

The event was broadcast online through a Department of Defense website and members of the Shawnee city government and local residents were able to watch from Shawnee.

"The fact that this award was about having good policies that ensure employees and families are taken care of is gratifying, but this award was also given because we have coworkers who take care of each other and each other's families," City Manager Carol Gonzales said. "I am proud to work with such great people in Shawnee, who not only care about the community and the country, they respect and care for one another."