Just days after helping Mill Valley capture the Class 5A state football championship, senior Christian Jegen has been named the Kansas Gatorade Player of the Year for his accomplishments on the field, in the classroom and in the community. 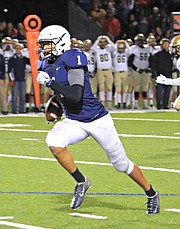 Jegen, who played wide receiver, running back and defensive back for the 12-1 Jaguars, accounted for 2,538 all-purpose yards and 31 total touchdowns this season.

Jegen caught 65 passes for 1,274 yards and 16 touchdowns and rushed 113 times for 824 yards and 14 more scores. He also recorded 34 tackles and two interceptions on defense and returned a punt for a touchdown.

Off the field, Jegen has a 3.75 GPA and is a member of Mill Valley’s Student Leadership Team. He has donated his time to an elementary school literacy outreach program and serves as a youth football coach.