Shawnee — It was a tale of two halves for the Mill Valley boys basketball team on Tuesday night as the Jaguars overcame a three-point halftime deficit to capture an impressive 88-58 victory over visiting Gardner-Edgerton. 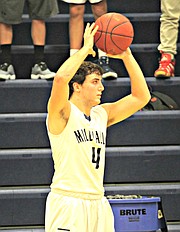 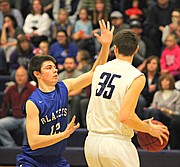 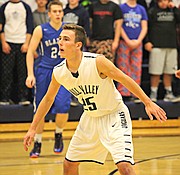 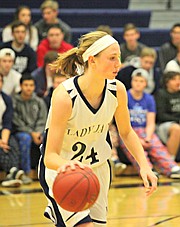 Mill Valley (2-0) trailed 38-35 at the break, but the Jaguars outscored the Blazers 22-5 in the third quarter and 31-15 in the fourth to pull away for the early-season triumph.

Mill Valley leaned on a balanced attack offensively, and four players — Logan Koch, Kasey Conklin, Cooper Kaifes and Clayton Holmberg — finished the contest with 15 points. The Blazers were led by Devan Toomey and Nate Wagner, who scored 12 and 11 points, respectively.

“I think we obviously put a little more emphasis on our defense in the second half,” Mill Valley coach Michael Bennett said. “We had a little more energy and paid a little more attention to the details, just making sure we were in the right spots.”

It was a high-tempo game from the tip, and after one quarter of play, the Jaguars found themselves trailing 19-14. The Blazers kept Mill Valley at arm’s length throughout the second period, but Tyler Grauer’s layup with two seconds on the clock cut the lead to just three points at the intermission.

The third quarter belonged completely to the Jaguars.

Mill Valley scored the first 12 points of the second half and kept Gardner-Edgerton off the scoreboard until the 5:18 mark. By that time, the Jaguars had built a seven-point lead at 47-40.

But Mill Valley wasn’t done there. The Jaguars kept their foot on the gas and capped the third quarter on a 10-3 run that put them ahead by 14.

That trend continued in the fourth, and a two-handed fastbreak slam from Holmberg handed Mill Valley a 71-47 lead with 4:45 to play. The Jaguars led by as many as 34 points after Derrell McLemore’s layup with 55 seconds left made the score 88-54.

“We got on a little run, which helped us set up our press,” Bennett said. “We got a couple of turnovers, and I think when we got on that run, it kind of eased the stress we were feeling, trying to fight back and come back. I thought we played a lot more freely in the second half.”

Next up for the Jaguars is a 7:15 p.m. road game against Lawrence Free State on Friday.

Despite a standout performance from Catie Kaifes, the Mill Valley girls had a tough time against Gardner-Edgerton earlier in the night, falling 51-42.

Kaifes scored a game-high 19 points for the Lady Jaguars (1-1), including 15 points in the first half alone. Claire Kaifes finished with six points, and Courtney Carlson, Evan Zars and Ashlyn Hendrix each added four.

“We’ve got to be stronger and a little more confident,” Mill Valley coach John McFall said. “It’s a learning experience for us. We’re young, and when we figure things out that we have to do, then that’s when we’ll become a good team. We’ve got a ways to go. There’s a number of things we can do better.”

The Lady Jaguars looked poised to run away with the game in the early goings, building a 13-4 lead late in the first quarter. But that momentum quickly evaporated, and Gardner-Edgerton responded with a 20-7 run to take a four-point lead into halftime.

Mill Valley trailed by just six points at the end of the third quarter, but the Lady Blazers quickly extended their lead to double digits in the fourth and never looked back as they held the Lady Jaguars in check through the rest of the game.

The Mill Valley girls will also be at Free State on Friday, with game time set for 5:45 p.m.