Mill Valley senior Christian Jegen made his mark in a variety of ways this season, but perhaps his biggest impact for the state champion Jaguars came from the wide receiver position. 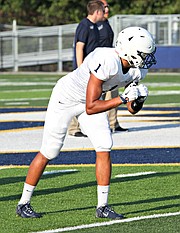 For his efforts, Jegen was named the Otis Taylor Award winner on Tuesday, an accolade given to the top wide receiver or tight end in the Kansas City metro area.

Jegen, who was recently named the Kansas Gatorade Player of the Year, caught 65 passes for 1,274 yards and 16 touchdowns as the Jaguars went 12-1. He averaged 19.6 yards per catch and 98 yards per game.

Jegen surpassed the 100-yard mark six times and scored a receiving touchdown in all but two of Mill Valley's 13 games.