Shawnee firefighters look on at the damage from a house fire Thursday morning in Shawnee that killed two.

The home at 4829 Lucille in Shawnee was heavily damaged by fire Thursday morning. 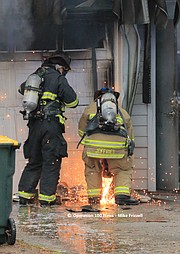 Overland Park firefighters use a saw to remove the home's garage doors.

Shawnee — The Shawnee Fire Department has confirmed that 3-year-old Christian Young and his great-uncle Ronnie Walkup died in a morning house fire at 4829 Lucille Lane, the same house where a fire in 1989 killed a 4-year-old boy of the same family.

Keri Brooks, a neighbor and distant cousin of the family, was just a girl when she saw the house burst into flames in 1989 and has now relived the experience as an adult.

"It's history repeating itself," Brooks said. "I can't believe how sad it is."

At 7 a.m. Thursday, emergency calls were made in reference to a fire at the house. Neighbors tried to knock on the door of the house to alert the family inside.

Two elderly women were rescued from inside the home while a 33-year-old man who Brooks said is Christian's father was able to escape the house. All three were taken to Kansas University Hospital to be treated for injuries.

Shawnee Fire Marshal Corey Sands said firefighters broke into the house through a bedroom window that was blocked by a bed and its headboard. Inside the house, Sands said, firefighters found a lot of "clutter" and had difficulty maneuvering inside. Firefighters were able to find Walkup in a hallway with Christian. Sands said it appeared both were trying to escape toward the front door.

"It's hard for a firefighter to see this," Sands said. "It's heartbreaking for anybody to see. Our hearts are with the family and the victims of this fire."

Fire struck the house, near 49th Street between Nieman Road and Quivira Road, years ago on Sept. 22, 1989, resulting in the death of a 4-year-old Cody Young, a member of the same family.

"I remember hearing their mom screaming for their baby," Brooks said. "The family has never been the same since that day."

Brooks said Christian and his great-uncle were extremely close. She said Walkup was like a second father to Christian and virtually raised him. She described Walkup as a "sweet, soft-spoken man." She said every member of the family grew up in the area.

Steve Day, who has lived across the street from the house for 40 years, said that the fire in 1989 was mostly contained to the basement. He said neighbors, similarly to Thursday's fire, ran over to the house to alert them that their basement was on fire.

Day said he would see the 3-year-old play in the yard often and said the family had lived in the house for many years.

"The kids were so active over there," Day said.

Investigators have not determined the cause of the fire. Sands said that a fire alarm in the house was found and one of the survivors did report hearing the alarm.

Sands said the Shawnee Fire Department has enlisted the help of the Olathe Fire Department and it's Accelerant K-9 unit. The dogs are able to detect any sign of an incendiary fire that would indicate that this fire was set on purpose. Sands said there has been no evidence to say that is the case. Sands said the department is also using a 3-D imaging camera from the State Fire Marshal that will provide a 3-D digital image of the interior of the house that will allow investigators to better determine the path of the fire.

Investigators worked throughout the day and into Thursday night at the house.

"We are not going to leave any stone unturned," Sands said.

Mike Frizzell of Operation 100 News contributed to this report