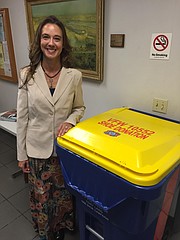 The legacy of charitable work for local veterans by the late Tony Lang is continuing even after his death.

Lang started his namesake shoe drive, The Tony Lang 1,000 Shoes Drive, four years ago to collect shoes for the Kansas Disabled Veterans Store in Kansas City, Kan. His goal was to collect 1,000 pairs of shoes each year to donate to disabled veterans and their families. The shoe drive was one of Lang's many projects with the Shawnee Veterans of Foreign Wars Post #10552 and Doug Simms, the current post commander, said Lang's work continues to live on.

"Half of the things we are doing now are because of Tony," Simms said. "His enthusiasm and character were beyond reproach."

The VFW has taken up Lang's torch after his death on July 9, 2014, and now sponsors the shoe and clothing drive. Simms said that when Lang started the shoe drive, he called it the 1,000 Shoes Campaign because he thought 1,000 was a lofty arbitrary number to aim for. By the second year of the drive, they were already collecting more than 1,000 pairs.

Simms said the VFW is on track to exceed their goal again this year thanks to the help of the city, Mayor Michelle Distler and the citizens of Shawnee.

Through December, the city and VFW post will continue the drive by collecting lightly worn shoes and clothing. There are donation containers located at City Hall, 11110 Johnson Drive; the Shawnee Civic Centre, 13817 Johnson Drive; and the John B. Glaser Fire Station, 6501 Quivira Road. Some private businesses such as Little Monkey Business, The Downtown Coffee House and The Dress Barn also have collection bins.

Distler is urging Shawnee to help the cause by donating their gently used goods as a way to say thank you to disabled veterans and their families. Distler said she and her family jumped at the opportunity to help and have been collecting clothes this fall to donate.

"Shawnee has always been great with supporting local veterans and any way that I can serve them, I will," Distler said.

Because Lang was a Marine, Simms said they "dressed up" the collection bins for shoes, donated by Rehrig Pacific Company, as a marine with a red stripe down the side of the blue bin.

Simms said Lang is sorely missed in the VFW and Shawnee community, but his memory lives on through the annual shoe drive.

"He made you want to do more for the community," Simms said. "He is still very much a part of this community."

For more information on how to give, go to www.shawneemissionvfw.org