Evelyn Van Kemseke, founder and president of Shawnee Community Services, is "euphoric" about the realization of her dream, a new and larger building for her nonprofit organization.

Evelyn VanKemseke, Shawnee Community Services founder and president, totes two bags of potatoes to the front of the store where clients could pick them up on Oct. 8. In recent weeks the charity has received 21,500 pounds of donated potatoes, with another 5,000 pounds expected to arrive Oct. 22.

Evelyn VanKempseke did all the little things right and, in turn, made an enormous impact on her community.

She loved spending time at Shawnee Community Services, the food pantry and community service organization she founded in 1982, stocking shelves and packing food boxes. She loved being able to help so many people and loved seeing the faces of the people she was able to feed.

Even during the last few weeks of her life, she spent six days per week at Shawnee Community Services, doing the little things to help those in need. To her two daughters, Sylvia Terry and Marlisa VanKemseke, who are the executive director and volunteer coordinator at Shawnee Community Services, it was the moments in and around the center that they’ll remember most about their mother. The little things.

“It’s the everyday, humdrum stuff that she will be remembered for because she just loved being there, everyday, to take care of people,” Marlisa VanKemseke said.

Get the latest news from the Shawnee Dispatch in your Facebook feed: theshawneedispatch

But there were also the big moments and honors that will always be remembered. And Evelyn VanKemseke had plenty of them. Recognition of VanKemseke’s community work began in 1966, when she received a Certificate of Excellence from Johnson County United Way. She was a founder of the Johnson County Christmas Bureau and the Shawnee Safety Council; has been recognized for her contributions to Kiwanis, Lions Club, Shepherd’s Center, Rotary and Daughters of the American Revolution; and was named Shawnee Citizen of the Year; first honorary lifetime member of the Shawnee Chamber of Commerce; winner of the Johnson County Rotary Paul Harris Award and the DAR National Community Service Award; and was twice named Woman of the Year by Shawnee Journal Herald readers. She is also the only woman painted by her longtime friend and local artist Charles Goslin on the city’s historical mural with the city's past mayors in Shawnee City Hall.

Even when she got bad news about her personal health, VanKemseke maintained her positive attitude. She was diagnosed with lung and colon cancer in July. She battled the disease for months, and her family wasn’t sure she would make it through August. And that’s when she received one of her most memorable honors. 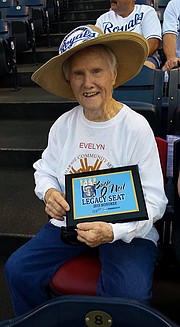 She had been nominated by the Rotary Club for the Buck O'Neil Legacy Seat at a Kansas City Royals game and was selected for the seat on Aug. 26. Marlisa VanKemseke said her mother was “bound and determined” to make it to that game.

And she made it much longer, almost to the biggest holiday at Shawnee Community Services — Thanksgiving. In August, VanKemseke’s energetic spirit could be heard in her voice as she said she was “tickled” to be honored with the Buck O’Neil Legacy Seat. But she also spoke passionately about wanting to continue her work up until her last days and continued to carry her recognizable smile. She said she couldn’t imagine anything worse than being homeless and hungry.

She did just that until two weeks before Thanksgiving when she was hospitalized after a doctor’s visit. Her work was done, but her legacy’s work was just getting started.

Shawnee Community Services, led by her daughters, is helping more people than ever again this year for Thanksgiving by donating about 400 Thanksgiving meals to families in need. Evelyn VanKemseke’s original goal for the nonprofit will continue on. She designed a community service center that has no limits to its generosity, her daughters said. There are no income restrictions or geographical restrictions.

It was simple for VanKemseke: If you were a person who needed food or clothing, she was there to help.

Marlisa VanKemseke said the family has heard countless stories of people who come back to Shawnee Community Services to say thanks for helping them in challenging times in their lives.

“She affected thousands of lives and, really, we won’t ever know how many lives she has truly affected,” Marlisa VanKemseke said.

Many around Shawnee, including Evelyn VanKemseke’s fellow parishioners at St. Joseph’s Catholic Church, call her the “Mother Teresa of Shawnee.”

The VanKemseke family at Shawnee Community Services has received an outpouring of support and condolences from volunteers and the community in the few days since Evelyn VanKemseke’s death Wednesday, at the age of 87.

“I’m sure the entire community is mourning her passing but also celebrating her incredible life,” Meyers said.

Meyers spent years working with VanKemseke on various projects throughout the city. He said she was an important leader and organizer of community projects not only through Shawnee Community Services, but with the city, the Rotary Club and various church groups.

“There are many influential people within the community, but as far as longevity and goodwill work, there aren’t many, if any, who rise above Evelyn VanKemseke,” Meyers said.

Mayor Michelle Distler had selected Shawnee Community Services as the recipient of this year’s Mayor’s Christmas Tree Fund. Distler said VanKemseke was grateful for the gift this year when she broke the news to her two months ago.

"I chose her Shawnee Community Services because she has such a direct impact on this community," Distler said.

Distler volunteered for VanKemseke for five years from 1991 to 1996 and Distler’s sister worked with her from 1991 to 2004. Distler said she has "been a part of the family for a long time." Distler said VanKemseke's unwavering humble attitude is something she will never forget.

"She was an amazing person," Distler said. "I wish more people aspired to be like her."

The VanKemseke family and the family of volunteers at Shawnee Community Services are excited to carry on her legacy. To honor her, the board of directors is considering naming the Shawnee Community Center’s building after VanKemseke and her late husband, Amel, who everyone knew as Amos.

“Mom did not want anyone to be sad or tearful with her illness or passing, she wants a celebration of life,” Marlisa VanKemseke said.

Nico, thank you for this beautiful tribute for our dear Evelyn.