ONW pulls away from SMNW with big second half

Overland Park — The Shawnee Mission Northwest football team seemed to have all the momentum against Olathe Northwest in the third quarter of Friday’s Sunflower League matchup at the North District Stadium. 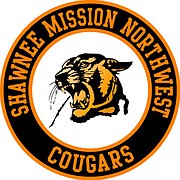 But that momentum quickly vanished into thin air as costly turnovers and a superb performance from Ravens running back Brendan Watkins led to a 50-29 victory for Olathe Northwest.

The Cougars (1-5) took a 22-21 lead with 9:03 to play in the third period, but the Ravens (5-1) fired back with 22 unanswered points to secure the decisive victory. Watkins played a key part in that resurgence, rushing for 156 yards and three touchdowns on just 13 carries.

SM Northwest out-gained Olathe Northwest in total yardage, 457-333. The Cougars, however, turned the ball over four times and set the Ravens up with great field position on several occasions.

SM Northwest quarterback Ron Kopp was picked off by Bo Steele at the Cougars’ 32-yard line on the first drive of the game. The Ravens immediately took advantage of the error, scoring two plays later on a seven-yard run by Watkins.

The Cougars answered back on the ensuing possession, however, as Perry raced 56 yards for a touchdown out of the wildcat formation. That tied the contest at 7 with 9:02 remaining in the first quarter. Perry finished the game with 142 yards on 17 carries.

SM Northwest took its first lead of the game with 1:13 remaining in the opening period, as Preston Killingsworth connected on a 27-yard field goal.

Olathe NW responded early in the second quarter when Darius Henderson plunged into the end zone from two yards out. Just like that, the Ravens were back on top, 14-10.

Later in the quarter, Kopp hit Gerrit Prince for a 57-yard score, but the play was called back because of an offensive pass interference penalty. Kopp tried throwing a deep ball to Prince on the very next play, but it was picked off by Kyle Rinck.

The Ravens capitalized on the turnover once again with 1:33 to play before halftime, as Rinck finished what he started with a three-yard touchdown run.

With only a limited amount of time, Kopp and the Cougars went to work in their hurry-up offense. SM Northwest drove all the way down the field, and with just 20 seconds left on the clock, Kopp hit Prince for a 10-yard touchdown. That made the score 21-16, Olathe NW, heading into the locker rooms.

Kopp finished the game 20-for-32 for 301 yards with three touchdowns and three interceptions. Prince led the Cougars’ receivers with seven catches for 128 yards.

The Cougars kept their momentum going early in the third when Kopp connected with Brian Morelan for a 15-yard touchdown. That gave SM Northwest its final lead of the game at 22-21. It was all Olathe Northwest from there.

On the ensuing kickoff, Rinck raced 71 yards down to the Cougars’ 20-yard line. Easton Krupper later scored on a one-yard quarterback sneak to give his team the 29-22 advantage with 6:46 left in the third quarter.

After recovering a fumbled exchange between Perry and Kopp, the Ravens found paydirt once again on a 37-yard run by Watkins. Kopp’s third and final interception — picked off by Trey Espy — gave Olathe Northwest another short field, and Krupper again scored on a one-yard keeper. That put the Ravens up 43-22 at the end of the third.

Perry finally ended SM Northwest’s scoring drought with a one-yard touchdown run early in the fourth. But Watkins turned on the burners for a 41-yard score a few minutes later for the final points of the night.

The Cougars will be back in action at 7 p.m. on Friday as they play host to SM West at North District Stadium.