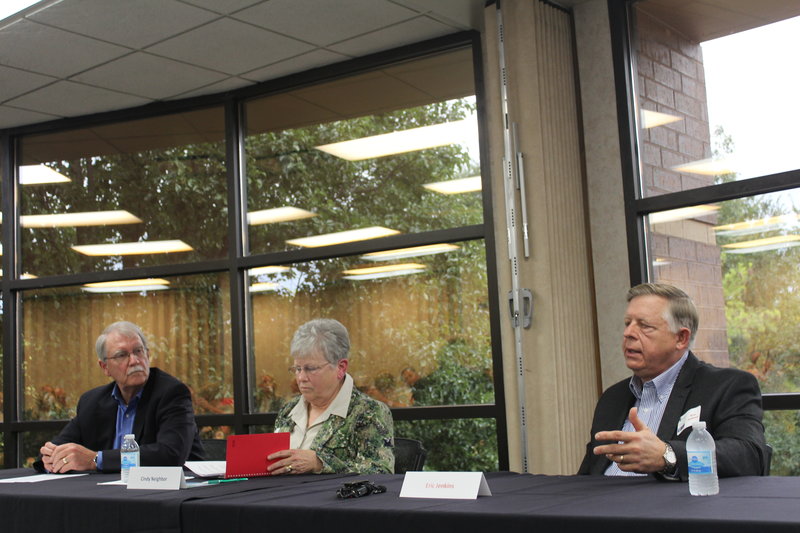 Tom Robinett, the vice president of government affairs for the Overland Park Chamber of Commerce, left, served as the moderator last week for the Popcorn & Politics forum in Shawnee. Here, he is pictured with House District 18 candidates, Cindy Neighbor and Eric Jenkins. Enlarge photo

The general election is less than one month away.

Sure, you’re all caught up in the presidential race. But do you know which local candidates will earn your vote?

Issues ranged from schools to the state budget to religious liberty.

As a small business owner, she wants to see economic development flourish in the state of Kansas. But she’s leery about the use of public incentives, such as STAR bonds, because she doesn’t want to see them become abused.

“Government should not be in the position to determine winners and losers in the marketplace,” said Pilcher-Cook, a Shawnee native. “When only certain businesses get tax breaks, it means others do not and it drives away competition, which is so important to keep prices lower for consumers. In addition, when special interest tax breaks are given out, taxpayers are forced to pay from their pockets.”

Meanwhile, her opponent, Vicki Hiatt, a retired special education teacher, said she is appalled by the current state of the state’s budget and believes the Kansas legislature needs to repeal the tax cuts of 2012.

“That will give us an immediate revenue flow and help us shore off some of those situations we have and it will mean increasing taxes,” said Hiatt, of Shawnee. “But once we get to a point where we can make our payments and keep funding the things state government needs to fund, then we can look at getting a fair policy of taxation so we can meet the needs of all the people in Kansas.”

At the forum, he recalled attending an NAACP event where it was asked which cities required police to wear body cams. While he supports the use of body cams in Shawnee, and other metropolitan areas, he doesn’t think it’s appropriate for the state to require every community to enforce it.

After all, he pointed out, in many tiny Kansas towns, body cams would be unnecessary.

It’s up to each city to determine what is right for them, he surmised.

“It’s time local government stand up and say ‘back off, we can handle our own business here’ because those are the people who are held directly accountable for the constituents they serve,” Jenkins said. “If you don’t like what we’re doing, it’s pretty easy at the local level to get rid of somebody, believe me.”

As a past president of the Kansas School Board Association, she sees the program as taking money away from public education.

“Private schools can teach whatever they want,” pointed out Neighbor a former state representative for District 18. “They do not have to have highly qualified teachers. If we’re going to look at the voucher or tax credit issue for private schools, we need to all be on the same playing field...that is not happening.”

In House District 23, which covers southeastern Shawnee, both Lenexa candidates didn’t hold back either.

Republican state Rep. Linda Gallagher, a former journalist, said she opposes any religious freedom bills that give businesses the right to discriminate.

“Where those laws have been instituted in other states, it has caused tremendous loss of jobs and tourism and esteem for the states and I certainly would not support anything like that in Kansas,” she said.

Her opponent, Amber Versola, a community leader, would like to see the Kansas government stop diverting money from the Kansas Department of Transportation.

“I think we need to look at other ways,” she said. “We need to use KDOT to fund infrastructure, use it for what it’s intended for, and balance our budget by not creating reckless policies.”

Candidates Amanda Grosserode, Republican, and Cindy Holscher, Democrat, of House District 16, which does not cover Shawnee, also participated in the forum.

Candidates Thomas Cox, Republican, and Democrat Helen Stoll, of House District 17, which covers central Shawnee, did not participate in the forum.

To learn more about each candidate, watch the forum videos at www.votejoco.com.