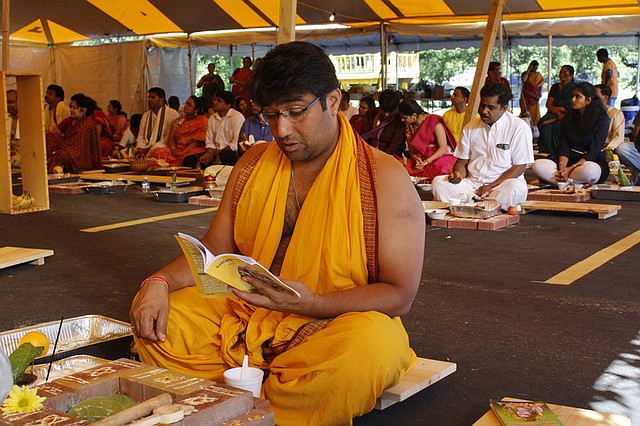 Ravi Aysola, of Overland Park, reads from a prayer book at the Hindu temple in Shawnee.

The sweet and spicy scent of incense permeated the air. The Hindu priest chanted loudly, as drums echoed in the background.

Sitting barefoot on the parking lot pavement, underneath a large yellow tent, were hundreds of Hindu devotees, most of them Indian.

Women, adorned in colorful saris, closed their eyes and concentrated on the Sanskrit-spoken mantras. The men, also donning traditional garb, mouthed along to the words. Some even loudly chanted along, reading the prayers from their smartphones.

Children chased each other outside the tent, both awed by the ritual and eager to eat lunch.

The outpouring of spirituality was part of the World Peace Prayer held at the Hindu Temple and Cultural Center of Kansas City on Sunday morning.

The temple, located at 6330 Lackman Road, holds the massive prayer every five years. This year, the prayer commemorated the 15th anniversary of 9/11.

“Peace is not just for one person, it is for everybody,” said Ravi Baburajan, a volunteer at the temple. “When three-thousand people died that day, people from different parts of the world were affected. This is our way to help with the hardship and suffering so many still face from that tragedy.”

Part of the ritual on Sunday involved each person offering gifts, such as fruit or flowers, to Lord Ganesh, the remover of obstacles.

For Ravi Aysola, of Overland Park, the act is a very significant one.

“Offerings are a way to receive balance,” he said. “They are not about bribing the God. Each of us has been given such a wonderful life and this our way of showing gratitude.”

For Hindus around the world, gifts include anything God has created in its purest form, added Aysola, which includes silk or even gold.

After the ceremony, ash from burning fires is offered to worshippers, to smudge on their forehead.

He pointed out that the world peace prayer ceremony is typically conducted in India, since it is difficult for priests in the United States to learn the intricate Sanskrit mantras.

A lot of studying and practicing is required for spiritual leaders to master the ceremony.

To have the ceremony occur in the Kansas City area is a big deal, he said.

On Sunday, the event drew participants from as far away as Omaha and St. Louis.

The packed event, which took place under a large tent in the parking lot, reminded temple officials an expansion of its cultural center was dire.

The Hindu temple, built 25 years ago, was created to space around 50 families.

Today, the temple serves around 1,000 families.

“The Indian population in Johnson County has grown tremendously in the past 20 years and we need a larger facility to reflect that growth,” Baburajan said. “Not only is it difficult to have everyone inside, but parking is very limited for us right now.”

Although an expansion is still in the infancy stages, officials are trying to figure out a financial plan to kick off that project.

Meanwhile, at the temple Sunday afternoon, worshippers didn’t mind being a little cramped at the cultural center.

Satya and Pinki Samantaroy, of Overland Park, came to the World Peace Prayer with their two young sons.

Although they didn’t participate in the rituals, they were one of the dozens of observers.

“Today is about safety and prosperity,” Satya said. “It’s about bringing people together.”

As their son waved to a friend, Pinki smiled.

“It’s important for our children to learn our culture and let them learn the values we are trying to achieve here,” she said. “When they grow old, they will continue our values.”