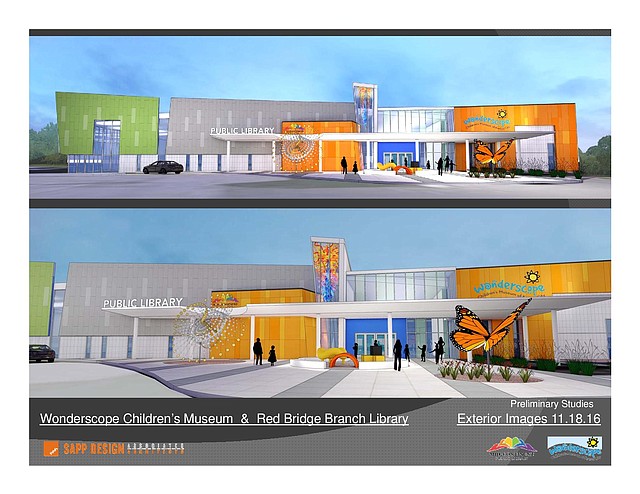 This rendering reveals the new building for both Wonderscope Children’s Museum and the new Red Bridge library branch.

In three years, Wonderscope Children’s Museum of Kansas City will leave Shawnee and move across the state line.

It was a bittersweet decision for museum officials, but the bottom line came down to the museum needing more space, a better layout, access to highways and bus stops and more visibility in the Kansas City area.

The museum’s new facility will be a 30,000 square-foot colorful, state-of-the-art building adjacent to a new Mid-Continent Public Library branch in the Red Bridge Shopping Center, which sits near Red Bridge and Holmes Roads in south Kansas City.

A 300-seat auditorium will connect the library and the museum.

The eye-catching building will be part of the shopping center’s ongoing revitalization.

In the past year, Lane4 Property Group, Inc. has invested millions of dollars to renovate the once nearly-vacant Red Bridge Shopping Center.

Museum officials are excited for the move because they think the Red Bridge area is suitable for Wonderscope’s growing needs.

The museum serves as a creative and fun learning experience for children 10 and under.

The larger new space will allow the museum to have bigger and more innovative exhibits, pointed out Roxane Hill, the executive director of Wonderscope.

There is also room to build a three-dimensional climbing structure for kids.

Hill hopes in the future, the library and museum will work together on children’s events.

“We have a lot of synergy with a library because our goal is the same,” she told the Dispatch. “We’re both a learning resource for children. To bring us both under one roof made a lot of sense. Red Bridge (library) has a large footprint in the Kansas City area, so it will allow us to reach more people.”

The new building will be in a neighborhood that is continuously attracting younger families.

The new locale is near popular bus stops and two major interstates.

Moving across the state line made sense because around 40 percent of the museum’s members reside in Missouri.

Plus, the new location is near Johnson County.

“It (Wonderscope) was never just a Shawnee attraction,” Hill said. “We’re for the whole Kansas City area and we want people to access us easily.”

She is excited about the new building, which she thinks makes a positive statement.

“It’s something the community will be proud to see and a structure where kids will be excited to go,” she said.

With south Kansas City growing, museum officials decided that part of the metro area would be a great location.

Hill told The Dispatch the museum had opportunities to relocate toward downtown Kansas City, but ultimately it was decided to move closer to the suburbs, where a larger parking lot could be built, making it easier on families with young children and car seats.

Right now in Shawnee, the museum is brimming near capacity in the former Flint Elementary School, 5700 King St., which it leases.

The 17,000 square-foot building needs repairs and the classroom structure doesn’t offer a solid flow, as expected of a children’s museum.

The museum opened in Shawnee in 1987 in an old elementary school, located near where the current Target is off Shawnee Mission Parkway.

With fun exhibits and hands-on activities, the museum focuses on science, technology, engineering, art, and math for young children.

In the past year, the museum spent around $150,000 on improvements, such as upgrading exhibits and adding arts and crafts, music and storytime programs.

The investment paid off.

Although the museum has announced plans to move, Hill wants to emphasize to the Shawnee community that it’s not going anywhere yet.

The museum still needs to raise $12 million for the the new facility in the next three years.

It will continue making improvements to the current exhibits and museum features.

“We’re not about to close the door and walk away right now,” Hill said. “I want people to know we will continue adding to our exhibits in Shawnee and making improvements and augmenting our programming. It’s business as usual because we want to continue to make it the best experience possible for every family who walks through that door.”

Although the move isn’t for a few years, city officials are sad to see Wonderscope leave Shawnee.

“We’re proud to have been it’s home for 30 years,” said Kevin Fern, the executive director of Visit Shawnee, a division of the Shawnee Chamber of Commerce, which focuses on tourism. “It’s always sad to lose an attraction but I understand their reasoning. They need to focus on what’s best for them.”

He thinks the museum will be a good attraction for the Red Bridge area.

“The city has been a good partner to Wonderscope for many years. We are disappointed that a Shawnee location was not selected for the next phase of their growth, but we wish them well in their new venture,” she said in a statement to The Dispatch.

Groundbreaking on the new Wonderscope location is expected to take place next year.