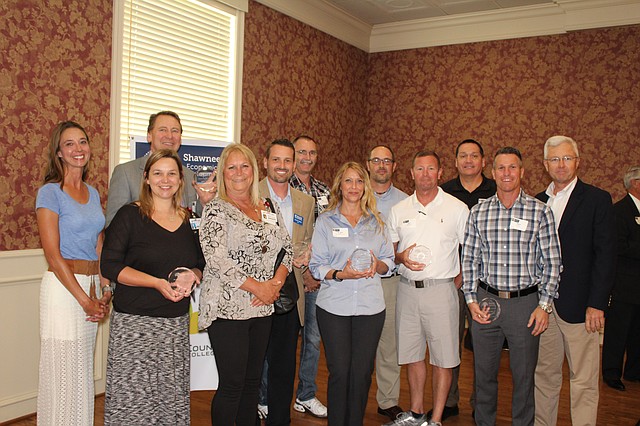 Mayor Michelle Distler, far left, poses with representatives from the majority of companies which won awards at the SEDC luncheon last week. Nine companies were given business development awards and two downtown businesses were also recognized.

Over the past year, numerous businesses have helped boost Shawnee’s economic development.

“For the past several years, millions of dollars have been invested in the community with industrial, office, retail and residential development,” said SEDC Executive Committee Chair Leo Nunnink. “These annual awards recognize positive economic growth and developments during the past year.”

The selection criteria for the Business Development Award includes having projects that were completed or nearly completed during the last 12 months that involved a capital investment of at least $1 million, and/or that created a significant amount of jobs in the community.

This year’s Business Development awardees were:

The online retailer is expected to employ more than 100 people at the Shawnee facility.

The project represents an $8 million capital investment and created 20 jobs.

“We have been so excited to be part of the Shawnee community and see this theater transform,” said Bob Bagby, president of B&B Theatres.

The project brought $2 million in capital investment and 10 new jobs to Shawnee.

CityWide Electric: Founded in Shawnee in 2000, the company provides electrical contracting services for projects that reach across various industries including commercial, industrial, residential, data and communications design build and more.

As a result of increasing growth, CityWide built a new 7,600 square foot facility at 59th Street and Barton in Shawnee.

The project added significant capital improvement to downtown and has allowed the company to grow to over 40 employees.

The new Comfort Inn & Suites was honored with a SEDC Business Appreciation Award. (L-R) Chirag Patel and Dilip Patel, developer at Jay Shree Ram Development pose with their award. This company is also developing the upcoming Fairfield Inn & Suites and a new shopping center on the corner of Midland Drive and Renner Road.

Comfort Inn & Suites: The new 65 room hotel, located at the northeast corner of Midland Drive and Renner Road, is expected to open later this summer.

The project has a wide impact by creating dozens of new jobs, adding to the tax base, and enhancing the transient guest tax fund by way of additional hotel room capacity.

“It’s great to be part of a community that recognizes development,” Dilip Patel, the owner, told the Dispatch. “This is a project dear to our hearts and we want to make Shawnee proud.”

He added that there are two other projects in the works for that corner: a Fairfield Inn & Suites and a shopping center.

“Shawnee is a hidden gem in the Kansas City area,” Patel said. “It’s an area that is viable. We want to make that corner (Midland and Renner) look nice and bright forever.”

Discount Tire: The company is America’s largest independent tire and wheel dealer with more than 940 locations across 33 states.

The store offers a wide range of product choices, affordable pricing and expert staff and brings 15-20 new jobs with it.

Entrematic: It has expanded its Kansas production operations and warehouse space into Shawnee, and has leased 70,000 square feet in the Westlink Business Center building two.

The company manufactures and assembles several models of A-marr brand garage doors and created 60 new jobs at the Shawnee facility.

The Swedish company has operations in 25 countries and employs about 2,800 people. It sells products in 80 countries around the world.

Federated Rural Electric Insurance Exchange: The company is the leading provider of property and casualty insurance for rural electric cooperatives.

The $17,300,000 project will be bringing 60 jobs to Shawnee with a projected annual payroll of 3 million dollars.

Economic development efforts for downtown Shawnee were recognized at the luncheon as well.

Two companies were honored for their work in this area.

Back in Motion recently renovated and transformed a vacant 7-Eleven convenience store to a 2,700 sq. ft. medical office at the southeast corner of Johnson Drive and Nieman Road. The business won the Downtown Revitalization Award.

Back in Motion Chiropractic was presented with the Downtown Revitalization Award, which is given to a business that has made the most significant improvement to the appearance of a downtown commercial building in the last 12 months.

Back in Motion recently renovated and transformed a vacant 7-Eleven convenience store to a 2,700 sq. ft. medical office at the southeast corner of Johnson Drive and Nieman Road.

“Considering we started as a mom and pop, we’re incredibly honored to be recognized next to all these companies who spent millions of dollars in Shawnee,” said Kile Casper, a chiropractor at the clinic.

He told the Dispatch he’s excited to be part of the positive changes occurring in downtown Shawnee.

“Downtown Shawnee is our home and we can’t see ourselves anywhere else,” he said. “Shawnee itself really is a little town in a big city where people know each other.”

And sitting down the street from Back in Motion is Betty C’s Bar & Grill, which was honored with the council’s Downtown Impact Award.

The honor recognizes businesses that have made a significant economic, employment or visitor impact on downtown Shawnee.