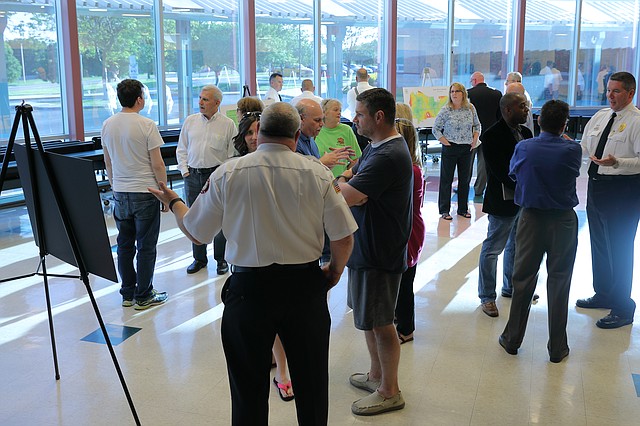 Dozens of residents showed up to a meeting at Riverview Elementary School last week to view preliminary plans for the location of a new fire station to be built in northwestern Shawnee.

Shawnee Fire Battalion Chief Al Hoelting (left) answers questions and listens to concerns of residents who attended the open house on May 17 to discuss the proposed site for Fire Station No. 74.

About 50 residents showed up to view preliminary plans for a new Shawnee fire station on Wednesday, May 17.

In July 2016, the Shawnee City Council raised the mill levy for the 2017 budget, partially to fund a new fire station in northwest Shawnee. Since the increase, the fire department and city staff have been working to locate a suitable site for the new fire station.

The fire department is recommending a site at 53rd Street and Woodsonia Drive as the location for the city's fourth fire station. The proposed station would face 53rd Street. The recommendation calls for Roberts Street be extended north to 53rd Street, giving fire crews the ability to respond through a commercial area, instead of near homes along Woodsonia Drive.

Fire Chief John Mattox explained to those in attendance that residential construction in northwestern Shawnee has boomed since 1988 when Fire Station No. 3 opened in the 6700 block of Hedge Lane Terrace.

Illustration of the growth in western Shawnee since Fire Station No. 73 was built in 1988.

Other sites considered by the fire department were at Garrett Park, near 47th Street and Aminda Street, and another city owned property on 55th Street just west of Belmont Drive.

The department determined the site near 53rd Street and Woodsonia could provide improved response times to more than 5,800 homes and nearly 17,000 residents. The two other sites could both impact about 2,500 homes and between 7,000 and 7,500 residents.

“It’s for the greater good,” said Ward III Councilman Jeff Vaught. “This site impacts the greatest amount of people most effectively. It seems to me that’s the direction you have to go.”

Mayor Michelle Distler said that most of the feedback she received at the open house seemed supportive of the new fire station. A few residents voiced concerns regarding the noise a fire station could bring to their neighborhood, mainly the sounds of sirens and horns.

Map illustrating drive times for the Shawnee Fire Department if a new station were constructed at 53rd Street and Woodsonia.

"I think through explanation and education to residents, the fire department staff eased the concerns of the residents in regards to noise and safety, assuring them they will be a good neighbor,” Distler said.

Fire department staff explained how firefighters are not using sirens or air horns while around the station and not all responses will require bright lights or loud sirens.

The main emphasis of a fourth fire station is increasing the level of service offered to residents of northwest Shawnee and decreasing response times.

"Response time is critical and the mission of our fire department is to save lives and preserve property," Distler told Operation 100 News. "The difference between success and failure is a matter of minutes or even seconds."

Mattox stated the next step in the process will be to share the feedback from the neighborhood meeting with the City Council.

"I think that the overall opinion was positive and supportive of our recommendation to locate the station at 53rd and Woodsonia," Mattox said. "My expectation is that we will begin final negotiations with the property owner to secure an option on that property and then take our plan to the Planning Commission for rezoning."

Mattox and Distler both added their thanks and appreciation for the residents who attended the neighborhood meeting to share their opinions and offer feedback.