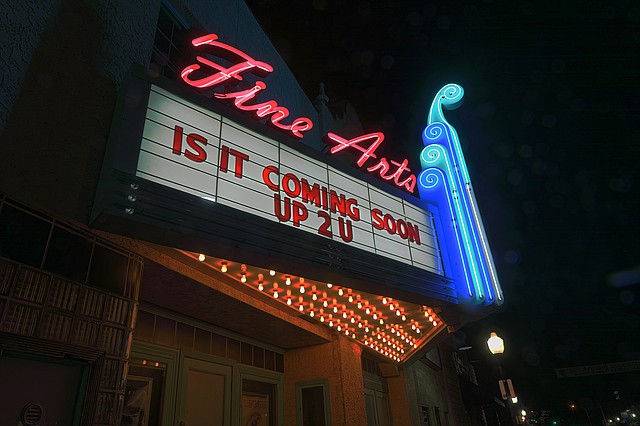 The marquee of the former Aztec Theatre was lit on the evening of Sept. 25 during the Shawnee City Council meeting.

An iconic little movie theater in downtown Shawnee is on its way to reopening.

At its Sept. 25 meeting, the Shawnee City Council voted 5-1 to invest $250,000 to help a group of local business leaders restore the historic Aztec Theatre.

The money will come from the city’s economic development fund.

The group will invest $100,000 of its own money, with a commercial loan funding the rest.

The $250,000 from the city will be used solely for the restoration and renovation of the theater, with the Aztec Group organizing fundraising and seeking private donations to cover the additional costs.

The project is one close to the business leaders’ hearts.

“We want this back,” said Jeff Calkins, who co-operates Calkins Electric Supply Company in downtown Shawnee with his brother, Chris. “This is something from our childhood which kind of disappeared for a while. My brother was forced to take me to the theater by my mom. It did mean the world to me. I was seven or eight years old at the time but it made an impression. I never thought we’d have an opportunity to give it back to the community.”

Calkins pointed out to the council that reopening the movie theater could increase pedestrian traffic to downtown Shawnee on evenings and weekends, it could increase spending at other local businesses, create new jobs and stimulate development in the area.

Earlier last month, Aztec Group LLC had approached the governing body at its council committee meeting, asking for half a million dollars.

But the council was hesitant to hand over that amount of money, plus it was worried about the lack of concrete clawbacks, should the theater be sold, leading Aztec Group to rework its request.

The $250,000 funding agreement, which the council passed last week, includes several detailed clawback provisions for various circumstances, such as if the group sells the theater within five years or ceases to open, for example, giving the city more security.

Several council members, and even the mayor, expressed excitement towards the theater’s potential reopening.

“I think this is a vital part for the revitalization of the downtown area,” he said. “I think we are probably going to realize by putting this downtown, people will say ‘look what they did’ and come. This will be the start of the building as development comes.”

Councilman Eric Jenkins, who is a vocal critic of tax incentives, said he saw this project differently than others that come to the city for financial assistance.

“If you step back and look at the more strategic picture of what are we doing with downtown, what are we trying to accomplish, it fits in with what we’re trying to do,” he said.

Fellow councilmember Mike Kemmling, who voted in opposition, said he had nothing against the project, but he couldn’t compromise his belief that government spending doesn’t belong in the business world.

“I like the fact we have a bunch of local Shawnee businessmen trying to revitalize the downtown of Shawnee, rather than some company from another city who doesn’t know us,” he said. “Your flexibility and willingness to work with the city is pretty impressive. The reservations I have with the project have really nothing to do with the specifics of the project. It has to do more with a philosophical one.”

During the meeting, before the vote, the mayor took a moment to clarify misinformation being spread about the project on social media.

One post in particular, was a Facebook live video streamed by Tamara Hudson, owner of Encore Unique Boutique in downtown Shawnee, which was viewed more than 11,000 times and was shared more than 150 times.

In the video, Hudson enthusiastically rallies support for the project, but lists a few inaccuracies.

Without naming the business or business owner, Distler read a transcript of the video, pointing out the misinformation, because she felt it was important to clarify it on record.

The video stated small town politics played a part in the theater remaining closed. Distler pointed out that the theater remained closed because the current owner, Williams, was unwilling to meet fire codes or put a bathroom on the first floor to be ADA compliant.

The video also stated the $250,000 investment was absolutely going to be paid back to the city, which the mayor pointed out was not true.

Distler said she felt it was vital the correct information be given to the public, because she doesn’t want people who may support the project based on the misinformation from the video to feel misled.

Shortly after the incident, Hudson, a familiar face in downtown Shawnee, revealed on her Facebook profile that her popular boutique would be closing.

On Sept. 28, she confirmed on Facebook that Encore Unique Boutique was closed.

In a follow up Facebook video on Sept. 26, Hudson told her massive following of supporters, “Everything is awesome. I want to say thank you so much to everyone who shared videos, posts, everything you did to make the theater get passed last night. I could not be more happy that the city council worked 5-1 to work with the Aztec Group There’s going to be really exciting things happening. There’s going to be really exciting things for downtown Shawnee and all of the businesses. Thank you for all the messages. Thank you for all the concern.”

As for the Aztec Group, they will spend the next several months preparing the Aztec Theatre for a potential opening in March.

-Operation 100 News contributed to this report