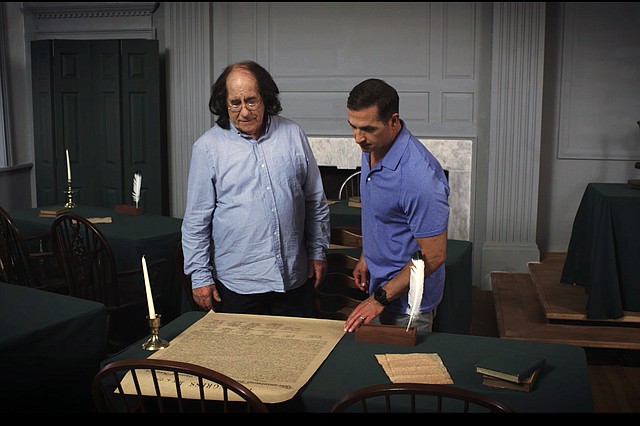 The patriotic movie “In Search of Liberty" aims to educate the public on the U.S. Constitution.

How well do you know the U.S. Constitution?

A fun new movie playing on Feb. 19 in Shawnee may put your knowledge to the test.

The educational drama, “In Search of Liberty,” aims to teach children, students, families and adults about the necessity of civil liberties, the ideals of the founding fathers and the values and principals that serve as a bedrock for the American way of life.

Tickets are on sale today and can be found here.

The family-friendly patriotic movie centers around a modern-day family who takes a magical journey with a historical figure, as they learn key elements of the Constitution.

It also shows the dangers to society if the Constitution ceases to exist.

The 91-minute feature aims to educate the public on a crucial document many might not know by heart.

“If we went out and tested people on the key elements of the Constitution, many would prove to be unfamiliar with them,” said Norm Novitsky, the film’s director and producer. “Our society has dumbed down how the Constitution is taught and the history behind it. What makes America exceptional is that we have a Constitution unlike any other on this earth, and that has allowed us to become a super power, a place where we can have freedoms and liberties protected by this document.”

Novitsky, an entrepreneur-turned filmmaker, said he’s excited to bring “In Search of Liberty” to Shawnee because it’s a great way to teach families about American history.

“Even if you’re a Constitutional scholar, there’s a good chance you’ll still learn something new,” he said. “We combined high-end drama and seat-of-your-pants storytelling with the timeless wisdom of our founding fathers, and the end-result is a cinematic experience unlike all others. If you’re a patriot, a history buff, or even an indie-film aficionado, you won’t want to miss this screening.”

If you can’t make it for the Feb. 19 screening, you can purchase the movie here.

“This movie is not just something to watch once,” Novitsky told the Dispatch. “It’s a movie where you can revisit each amendment because you’re visually learning the Constitution. It’s a timeless movie and a great heirloom to pass down to children and grandchildren.”