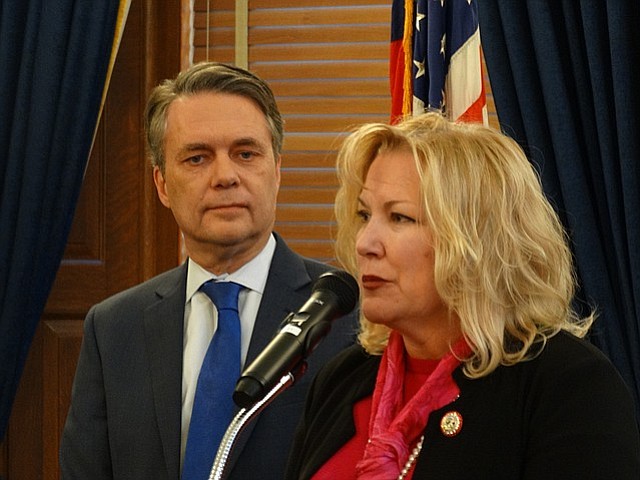 Lt. Gov. Jeff Colyer and Department for Children and Families Secretary Gina Meier-Hummel announce that they will seek an additional $16.5 million over two years to bolster child welfare programs at DCF, Monday, Jan. 8, 2018, in Topeka.

TOPEKA — Lt. Gov. Jeff Colyer announced Monday that the administration will seek a $16.5 million funding increase over two years to bolster child welfare services at the Department for Children and Families.

DCF Secretary Gina Meier-Hummel joined Colyer at a news conference to announce the plan, just hours before the Kansas House and Senate were scheduled to gavel in the first day of the 2018 legislative session.

"DCF is charged with protecting our most vulnerable Kansans, and our goal with our budget was to make sure we have the resources needed to take care of the issues we see," Colyer said.

In recent years, DCF has been beset by a wide range of problems that eventually led to the retirement in December of former DCF Secretary Phyllis Gilmore and to the appointment of Meier-Hummel, of Lawrence.

Those problems included children being taken into state custody and forced to sleep in social workers' offices because of a lack of emergency-placement homes, as well as more than 70 children in foster care who have been reported missing.

Those issues also prompted lawmakers last year to form a special child welfare task force, which is scheduled to issue its report and recommendations in January 2019.

Colyer listed several areas where the new funds would be focused, including the hiring of 20 additional child welfare staff; the hiring of investigative staff to help track down missing children; fingerprinting and background checks for foster care providers; improvements to a center where people can report suspected abuse and neglect; and more funding for family-preservation programs that are designed to prevent at-risk children from being taken into foster care.

In addition, the administration is asking to hire an outside consultant to perform a top-to-bottom review of the agency.

"We have been consulting with folks across the country since I've been in office a little over a month now," Meier-Hummel said, "and we know we are targeting the right things to focus on, but certainly we'll want to bring some additional experts to the table."

Colyer said about half of the $16.5 million would come from the state general fund, with matching funds from the federal government.

Meier-Hummel said if it's approved, it would be the biggest single one-time increase in child welfare funding in the state's history.

She also said that since she took over the agency, it has had success tracking down some of the runaway foster children. She said it's a constantly changing population, but that the agency has found approximately 110 children who had been reported missing at one time, while another 70 are still not found.

Of the total amount, Colyer said, about $4 million would be sought as an enhancement to the current fiscal year's budget, while the remainder would go into the next fiscal year, which begins July 1.

The request comes at a time when lawmakers are under intense pressure from the Kansas Supreme Court to increase funding for public schools. But Colyer said the administration believes lawmakers would be able to address both issues.

"We have enough cushion within the budget to deal with this," he said. "This is a high-priority thing, and we need to deal with it."

Senate Majority Leader Jim Denning, R-Overland Park, who attended Monday's news conference, said he was impressed with what he had heard and that he supported the proposal.

"She needs some extra resources, but it's a priority item," he said. "When we get the full budget, we'll be able to evaluate it."

Gov. Sam Brownback's budget director, Shawn Sullivan, is expected to release full details of the budget proposal to the Legislature and the news media Wednesday morning, the day after Brownback's State of the State address.

Releasing details of the governor's budget plan before the plan is released to legislators is unusual at the Statehouse, but publicizing the DCF budget proposal appeared to be part of the gradual handing-over of power from Brownback, who is expected to resign pending his confirmation to a diplomatic post in the Trump administration.

Colyer said he expects Brownback's nomination to be voted upon on the U.S. Senate floor early this year.