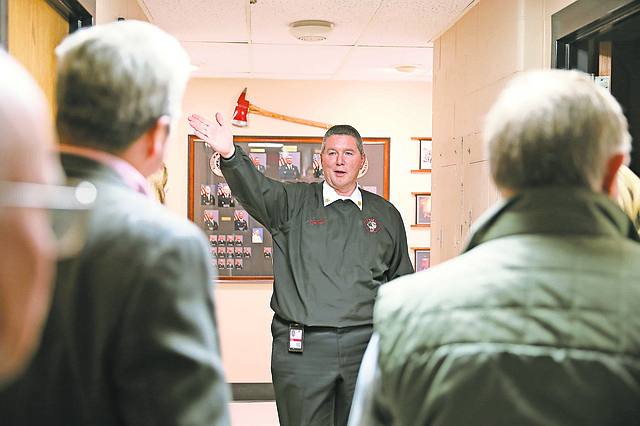 Shawnee Fire Chief John Mattox gives the city’s governing body a tour of Fire Station 71 during a special council committee meeting. During the meeting, he emphasized the department’s need for major building improvements.

Talks of a new fire station are heating up in Shawnee.

The building, 6501 Quivira Road, serves as both a fire station for the eastern part of town and the department’s main headquarters.

Some of the current challenges fire officials identified with the building include lack of office space, lack of fire sprinkler protection, aging mechanical and structural components, aging building concerns, and lack of privacy for both male and female personnel in the sleeping areas and bathrooms.

Because of the building’s awkward configuration, the fire department does not have a functional emergency operations center or public interface space.

The building, which opened in 1979, was originally designed to house volunteer fire staff and some administrative personnel.

The fire department side of the building was renovated in 1987 to accommodate three full-time personnel and three administrative positions, back when the city’s population was only 37,000.

Now, the city’s population is nearly double that number.

It is also used for limited parks and recreation programming, as well as storage for Shawnee Town 1929 furniture and artifacts.

In addition to the building itself, fire officials say the call volumes for the eastern part of Shawnee have continued to increase and response times from Fire Station 71, particularly to the northeastern area, are not in line with current industry standards.

The eastern part of town faces a growing number of calls because it has the highest density of multi-family apartment complexes, a higher density of commercial and residential units and also a large percentage of senior citizens living in the area.

To address response times and building concerns, the fire department is tossing around a few ideas. They include:

The additional squad site would be a new concept in Shawnee. It would include a rapid response SUV with two emergency response personnel, which would allow for emergency medical care without the need for a large fire truck.

The squad would bunk in a house, rather than a fire station, similar to models being done in Overland Park and Lenexa.

Over the next few months, fire officials are going to visit with construction companies and architects to look over practical options and pricing numbers, Shawnee Fire Chief John Mattox told the Dispatch.

Before diving into those discussions, however, the fire department invited the city council to tour the building, so they could see the issues with their own eyes.

Last Tuesday at its council committee meeting, Mattox guided members of the governing body through the building.

On the tour, they saw the station’s bunks, workout area, kitchen and offices. They also saw a sewing room and old jail cells, which have been turned into storage areas.

In the basement, the council toured through a Parks and Recreation senior citizen computer lab, Shawnee Town storage and the search and rescue maze used in training.

“A picture is worth a thousand words,” Mattox told the Dispatch. “We could have shown the council pictures or talked about it in meetings, but we wanted them to see how our firefighters actually live and breathe every day. We’ve adapted a lot and we’ve met our limit on what we can do.”

During the meeting, Councilwoman Stephanie Meyer said the tour was eye-opening.

“It’s pretty clear this is something the council needs to act on soon,” Meyer told fire officials. “You guys have a top-notch team and this facility is not acceptable.”

After the meeting, other council members expressed a similar sentiment.

Councilman Jim Neighbor told the Dispatch he toured Fire Station 71 when it was first built in 1979 and back then, he was impressed by how state-of-the-art the facility appeared at the time.

Now, not so much.

“Today, it has very obviously outgrown its usefulness and functionality so I welcome the idea,” he said. “They’ve done a remarkable job with what they have, but it’s definitely time to address it and make it state-of-the-art again for the next 40 years.”

Neighbor added he liked the idea for a squad facility.

“We need to do it and figure out how to do this efficiently,” he said. “I like the idea of making this station’s footprint smaller and building a new station in the northeast.”

He was impressed by the tour.

“I’m absolutely amazed at the resourcefulness of the folks at the fire department,” he said. “They found a way to get the biggest bang for their buck and they’re doing the best they can with taxpayers’ dollars.”

But he believed it was definitely a time for a change, he added.

“It will be a big logistical challenge, whatever we decide to do,” Zimmerman said. “The reality is, they’ve got all the miles out of this station they can get. I’m looking forward to see what they come up with.”

Mattox agreed it was not going to be an easy process, but emphasized the change was an important step in helping improve public safety in Shawnee.

He’s looking forward to being part of the journey to that goal.

“We want to do what’s best for the community and most responsible and end up with something that serves the community for the next 40 years,” he said.