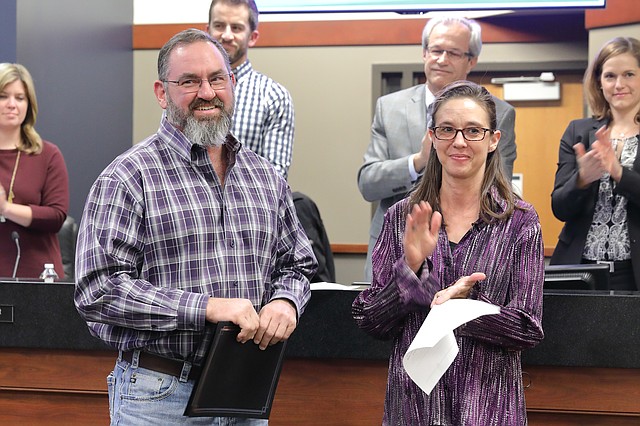 Shawnee Mayor Michelle Distler honored resident Craig Christopher for his bravery in saving a family from its home during a late night fire in December.

Two days before Christmas, Shawnee resident Craig Christopher was driving home from work at 3 a.m. when he smelled smoke.

After searching the area, he found a house on fire. He called 911 and ran upstairs to alert the family. Thanks to his bravery, the couple sleeping inside escaped safely.

And on Monday, Christopher was honored for his quick-thinking and selfless act.

During the city council meeting, Mayor Michelle Distler recognized him for being a Good Samaritan and “true Shawnee hero.”

She presented him with a service coin.

“If you hadn’t done what you did that night, this could have been a very different story, one that ended in tragedy,” she told him.

She also emphasized the importance of fire safety.

“Just as a reminder for everyone here, we urge you to check your smoke alarms and make sure they are working and if they’re not or if you don’t have any, please call the Shawnee fire department and they will give you a smoke alarm for free,” she told the audience.

Also at the council meeting, the following action was taken:

The council approved the purchase of numerous city vehicles.

It approved the mayor to sign a purchase agreement with Conrad Fire Equipment, Inc. for a 2018 Pierce Velocity Tractor Chassis Aerial and additional loose equipment from various vendors in the amount of $1,179,574.50.

The purchase of this fire department vehicle will allow Truck 71, a 2010 110’ aerial, to become a reserve.

The anticipated delivery of this massive new apparatus is twelve to fourteen months.

The council also approved the purchase of nine vehicles from Shawnee Mission Ford, one vehicle from Overland Park Jeep/Dodge and one motorcycle from Worth Harley Davidson in the amount of $314,772. These vehicles will be replacements for the police department’s patrol division.

The council approved the parks and recreation department vehicle replacement purchase of two vehicles from Shawnee Mission Ford in the amount of $93,218.

These new trucks will also be equipped with a snow plow and equipment to aid in snow removal operations.

The council also approved the public works department vehicle replacement purchase of two new dump trucks from Summit Truck Group, corresponding equipment from American Equipment, one tractor from Heritage Tracor and one set of mobile vehicle lifts from Stertil-Koni in the amount of $348,037.57.

At the meeting, city staff told the council vehicle and equipment replacements are based on manufacturer recommendations.

Staff looks at usefulness, the mileage and hours, the condition and maintenance costs, when making a decision.

The council approved a contract with Olsson Associates to provide staffing and engineering services for the 2018 Stormwater Management program in the amount of $214,080. These services include video inspection analysis and construction engineering.

For the past several years, the city’s stormwater division has utilized outside engineering services to perform the many tasks necessary for the stormwater programs.

The stormwater infrastructure asset management program includes pipe repair and maintenance, as well as video inspection which allows the city to keep on track with its stormwater maintenance.

According to Shawnee city staff, the funds are required to be used to provide benefits to low or moderate income Shawnee residents.

Three types of activities are funded: human services (which can’t exceed 15 percent of the total funding), infrastructure and housing.

Also in 2017, the City of Shawnee completed a street and stormwater improvement project on Barton Street between 66th Terrace and 67th Street.

The improvements included upgrading the street to city standards with the addition of curbs, gutters, stormwater improvements and sidewalk.

The 2017 CDBG infrastructure project will not be completed until 2018.

These funds were spent on repair work on 12 homes in Shawnee.

Several properties are currently under review and pending repair work.