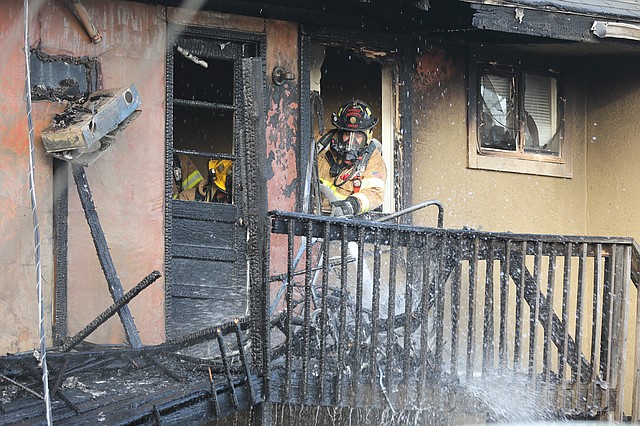 Firefighters inside the duplex work to ensure that the fire on the back deck has been extinguished.

Shawnee Firefighters work to extinguish a hot spot on the rear of the duplex.

Embers blown from the rear of the duplex caught the grass around the home on fire.

Firefighters from the Shawnee and Overland Park Fire Departments were called to the fire at 13415 West 60th Street at 3:54 p.m.

"Shawnee Fire crews arrived and found heavy fire involvement on the back of the duplex with the high winds spreading the fire to the inside," Shawnee Fire Marshal Corey Sands said in a news release. "Residents on both sides of the duplex were not home at the time of the fire and damage estimates are at $80,000"

The fire also spread to the grass around the duplex, burning black patches into the back and side yard.

Fire Marshal Sands confirms no injuries were reported. The American Red Cross responded and is assisting both families.

The cause of the fire remains under investigation.