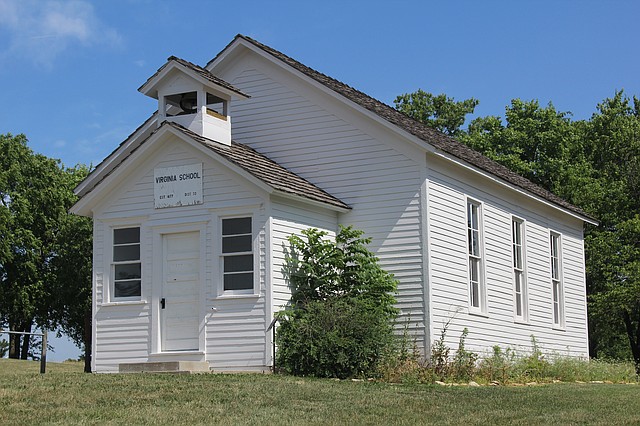 The Virginia Schoolhouse, 7301 Mize Road, is one of the Monticello Township landmarks included on the Monticello Community Historical Society’s driving and biking tour. The one-room schoolhouse initially sat near 71st and Clare Road, but was relocated near Mize Elementary School in 2005. The school, for grades 1-8, opened for class in 1878 and operated until 1962.

Amidst the busy intersections, shopping centers and pristine subdivisions of western Shawnee, it’s easy to get lost in modern America’s accelerated lifestyle.

Sitting under the nose of northwest Johnson County is a piece of America’s past that lit up history for one brief moment, before quickly collapsing into near-obscurity.

That piece of the historical puzzle is Monticello Township.

The once-thriving area extended from the Kansas River to 105th Street, and stretched from I-435 to De Soto.

As our country celebrates the anniversary of the adoption of the Declaration of Independence this week, one area historical society hopes to keep Monticello Township’s memory alive by sharing its story.

The Monticello Community Historical Society offers a museum and research center dedicated to the former township.

The organization was founded 30 years ago in a Methodist church by the late Bertha Cameron, a descendent of early Shawnee settlers.

Today, its headquarters sits in a former fire station near K-7 Highway and 83rd Street.

Current society president Terry Love told the Dispatch he considers Monticello Township’s rise and fall from glory to be one of the most fascinating he’s encountered during his several decades as an aviation author and historian.

Monticello Community Historical Society president Terry Love poses next to a replica of a frontier wagon at the society’s museum in Lenexa. The museum features dozens of historical artifacts from Monticello’s heyday.

Love, a retired airline official who spent much of his adult life in Minnesota, returned to the Shawnee area with his wife in 2005 after becoming intrigued by his genealogical background.

During his ancestry research, he discovered that 150 years ago, his great-grandfather Peter Cowardin was the first rural-routed delivery postman for the Shawnee area.

Love actually lives in the estates next to where his great-grandfather’s route would have gone by in Monticello Township.

It’s uncertain the exact date Monticello was founded, but research indicates it was established some time in the 1850s, when white settlers were starting to head west for land.

As those settlers, mostly men, poured into the area, the land was already mostly inhabited by Shawnee Indians who lived in log cabins and raised crops.

According to Love, it was not uncommon for the settlers who became Monticello landowners to marry Shawnee Indian women, who were famed at the time for their beauty.

An 1860 census shows both Olathe and Monticello had 500 people in its population simultaneously.

It was one major decision, however, that allowed one city to survive, and the other to fade away.

During the Civil War, the U.S. government was in the process of expanding the country’s railway system out west.

Due to Monticello’s hilly terrain, the government opted to build the railway system through Olathe instead, allowing it to become the county seat.

As a result, Monticello quickly dried up.

By the early 1900’s, buildings, such as the post office and general store and saloon, were closing and the township sank into a slow-paced rural environment.

Love encourages people to not dismiss Monticello, because during its brief moment in the sun, the township played an important role in American history.

One of the township’s first constables was a 19-year-old Illinois gunslinger who would later go on to be known as “Wild Bill” Hickok, a legendary lawman of the Wild West.

The young man claimed 160 acres of land near what is now 83rd Street and Clare Road.

Back in the frontier days, boys were gifted their first gun by 5 and they were expected to be good marksmen by 10. Hickok was no exception, proving himself to be an expert marksman by the time he was 12.

His time upholding the law in Monticello was short-lived, however, as he quickly moved on to other adventures.

Another claim to fame involves handsome golden-era silent film star Buddy Rogers, an Olathe-native who starred in “Wings,” the first Hollywood film ever honored with an Oscar for Best Picture at the first Academy Awards in 1929.

In his youth, Rogers and his schoolteacher father dutifully rode horseback from Olathe to a Monticello Township one-room schoolhouse, located near Monticello Road and Johnson Drive. With the distance being nearly 10 miles, that was a three-hour commute each day for the pair. This portion of a painting by Charles Goslin shows a concept of early Monticello Township based on the late historian Bertha Cameron’s research.

Monticello Township was also the childhood home to J.C. Nichols, a famed real estate developer who helped build the residential and commercial landscape of Kansas City, Mo. and surrounding areas in the early 20th century.

The area was also the home to numerous names that may be familiar to people who live or work in western Shawnee or Lenexa.

“Monticello was very rural and a lot of the early settlers had 10 to 12 kids each,” Love said. “You’re looking at a lot of people still living in the area who are descended from these people. A lot of streets and subdivisions are named after Monticello pioneers. It’s fascinating to learn about them.”

He encourages anyone interested to visit the Monticello Community Historical Society museum to view historical artifacts and learn more about the area.

He often receives phone calls and emails from people around the country who are descended from Monticello settlers, seeking answers about their family’s frontier roots.

The Monticello Community Historical Society also provides a driving and biking tour guidebook, featuring several key landmarks, and welcomes the public to attend any of its upcoming meetings or events.

One of those events is coming up later this month.

Free old-fashioned ice cream and lunch will be provided. The event will honor charter members and feature a special “guest speaker” from the past.

Organizers hope nearby residents will attend to help celebrate the unique history of northwest Johnson County.

“The stories about Monticello are fascinating,” Love said. “The most frequent phrase we hear at the museum is ‘I didn’t know that.’ There’s always something fun to learn.”

For more information about the Monticello Community Historical Society, call 913-667-3706 or visit its website at monticelloks.org.