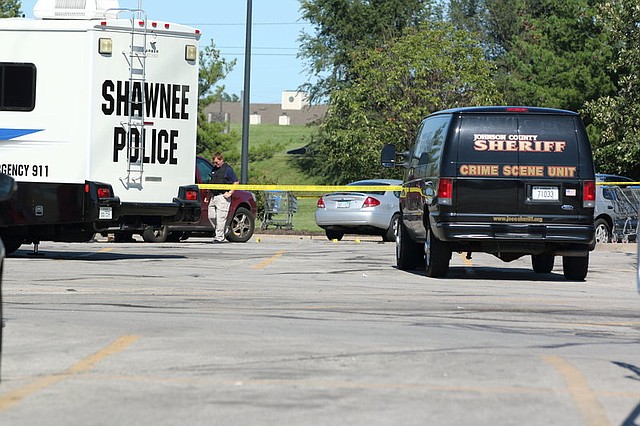 Evidence markers are strewn out across the corner of the Walmart parking lot as Shawnee Police and the Johnson County Sheriff's Office Crime Lab investigate Sunday afternoon's shooting.

An Overland Park man was sentenced today for a deadly Shawnee Walmart attack, which took place nearly two years ago.

Johnson County District Court Judge Brenda Cameron has sentenced Arthur Fred Wyatt III to a total of 180 months in custody of the Kansas Department of Corrections.

Wyatt was also ordered to pay $13,920 to the Crime Victims Compensation Board who paid owed money to the victims impacted by this crime.

According to a news report from Operation 100 News, the incident began on a Sunday afternoon when a woman was struck in the back of the head as she was putting her infant in a car seat in the Walmart parking lot.

A good Samaritan, identified as Joshua Owen, stepped into help but was shot three times during the course of tackling Wyatt’s co-defendant.

A second good Samaritan stepped in and used a gun of his own to fire back at the suspects, killing one of them. The second suspect, now known to be Wyatt, ran east from the Walmart, prompting a manhunt.

The deceased suspect was then identified as John W. Simmons, III, 28, of Kansas City, Mo.

A statement released by the Johnson County District Attorney’s office said many other good Samaritans provided aid to the mom who was struck, by allowing her to use their cell phones and caring for her infant while she was being treated.

Witnesses provided aid to Owen after he was critically injured and had blood filling up his airways and they assisted in providing critical identifying information regarding the second attacker, who fled from the scene.

“All of these citizens should be applauded for their bravery and their desire to help another human being in need,” the release stated.

The Shawnee Police Department and the Johnson County Crime Lab were the investigating agencies.