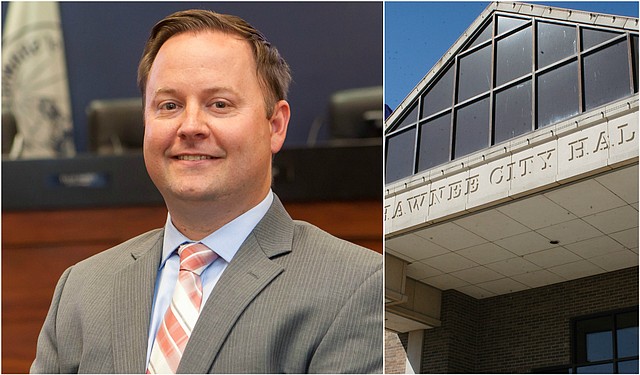 Nolan Sunderman will take over the role as Shawnee city manager next month.

The city of Shawnee didn’t have to look very far to find a new city manager.

He will start the position in early July.

Sunderman, a Shawnee resident, was one of four finalists the governing body believed met the requests of staff and residents.

The council extensively interviewed each candidate during executive sessions, before officially declaring Sunderman as their choice.

City staff and residents were also brought into the early process of the search, with the city holding surveys and a small focus group.

“Thank you to everyone who provided input into this process and very important decision,” said Distler. “I believe we, as a city, made this decision together. It’s not about thinking alike, but thinking together.”

In the past decade, he has also held roles as the assistant to the city administrator for Prairie Village and the economic development director for Lansing, Kan.

His municipal career, however, started when he was a teenager in Republic, Mo.

At 15, he took part-time jobs with the small town’s parks and recreation department.

By college, he was assisting city officials with opening a new aquatics center and putting together information about his county’s sales tax initiative.

In June 2016, he told the Dispatch, “I’ve always enjoyed being involved in the community, and I think it’s fun to see projects through and really make a difference for people. Every day in city government is different. When you pick up the phone, you never know what’s going to happen.”

His enthusiasm for helping Shawnee thrive over the past two years impressed the governing body.

“Nolan stands out for his friendly, logical, and community-oriented approach to 21st Century city management,” said Distler. “His references, and the council's interactions with him, showed him to be hard-working, ethical, even-tempered and a caring leader. He is aware of Shawnee's vision and values, and recognizes that we have a connected, engaged community with a great city staff.”

Sunderman will replace Vicki Charlesworth, who has served as interim city manager. She will retire in late 2018.

“During this time, Vicki stepped up and did a phenomenal job, making great strides to make us better than ever before,” said Distler. “Her efforts are beyond appreciated by the governing body. I am proud that all Shawnee employees have done a great job in ensuring that the city of Shawnee is where it is today, with as strong of community as it has. Not all cities are in this position.”

The mayor added that Sunderman has big shoes to fill, but she’s confident he will bring new ideas to the city and a sense of continuity.

Sunderman holds a Bachelor of Science Degree in Political Science and Master’s Degree in Public Administration from Missouri State University.

Nolan, his wife Natalie and their 5-year-old son Connor live in western Shawnee.

“I am honored to have the opportunity to help lead this community and will work to keep it a place where people are proud to live and work,” Sunderman said.