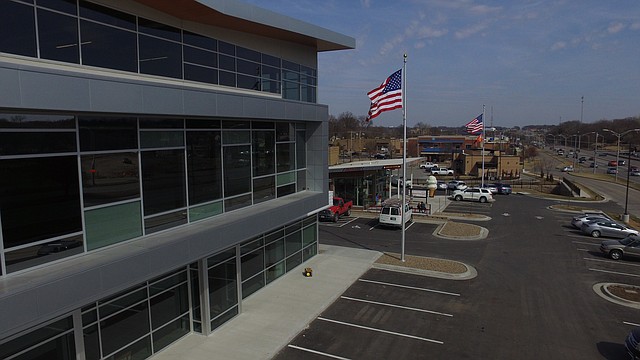 The new Stag’s Creek office building, at the northwest corner of Shawnee Mission Parkway and Goddard, is set to open for business April 2.

For several years, it was a decayed and neglected commercial pocket nestled in one of the metro area’s busiest corridors.

As drivers soared west down Shawnee Mission Parkway, into the city limits, they were greeted by the sight of abandoned restaurants, vacant storefronts and a crumbling strip mall at the northwest intersection of Goddard.

That eyesore is now a memory.

The core of the $15 million development project, a three-story concrete, glass and steel office building, is set to open for business on April 2.

The 35,000 square-foot office building features a heated underground parking garage, a four-stop elevator to all floors and it will serve approximately seven to eight tenants.

So far, 55 percent of the building is leased.

Current tenants include physician group Spira Care and Tevis Architects, which is relocating its main office to Shawnee from Lenexa.

A finance company and a dental group are also in negotiations, confirmed Kevin Tubbesing, owner of The Land Source and Stag Commercial development.

“We’ve had a great deal of interest in the building,” he said. “It’s heartwarming to know the project is seen with equal interest to our own.”

The road to development has not been an easy one, he told the Dispatch.

The large stretch of property sat on three hazardous waste sites and the location’s proximity to the nearby creek posed a challenge.

Tubbesing and his team worked closely with the Kansas Department of Health and Environment to clean up the area, which suffered chemical contamination from a long-gone laundromat and two gas stations.

The city of Shawnee moved the creek to the north and made it an improved channel.

A large amount of dirt work and tearing down dilapidated buildings and homes also took some time.

“It was a highly challenging project and not one you’ll see elsewhere in the Kansas City area,” Tubbesing said. “It was complex but rewarding. We’re proud to have brought this to Shawnee, our hometown.”

When it came to the design of the office building Tubbesing and Tevis Architecture came up with a clean, sleek structure reminiscent of the mid-century modern style.

With its massive glass windows, natural light wraps around the entire building on all sides.

“We wanted to make an architectural statement and not your typical rectangular office building,” he said. “What it’s become is representative of the spirit of the citizens of Shawnee. It’s innovative and forward-thinking.”

The Stag’s Creek office building is also now the most energy efficient building in Shawnee and within the top 10 in Johnson County, Tubbesing told the Dispatch.

“We are using a VRF heating/cooling system and the building lighting is all motion-initialized LED,” he said. “In April we will install RGB-LED building lighting that will be adjusted to the colors of the season making it an ever-changing landmark to the gateway to Shawnee.”

He told the Dispatch he’s grateful for the help of many people and entities in the city who made the project possible, in particular the city of Shawnee, the Shawnee Economic Development Council and investors from the Central Bank of the Midwest.

He’s looking forward to seeing the impact Stag’s Creek has on the rest of the eastern part of the city.

He’s hopeful it will establish a spirit of revitalization.

“I think you’ll see additional development coming along the Shawnee Mission corridor now, enhancing the quality of businesses available to our citizens and the general public,” Tubbesing said. “This project was the catalyst, which has been exciting.”

Id like to hear what happened to the businesses that were there before. Sure the building was not the best, but those businesses were someone's dream of creating a life for themselves.

I do hope that they found a good place to move to.