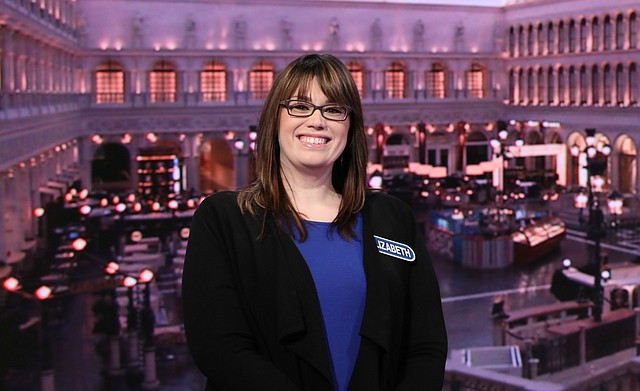 Shawnee resident Elizabeth Strother is a contestant on Wheel of Fortune.

Elizabeth Strother has been a fan of Wheel of Fortune since childhood.

And on Thursday evening, a national audience saw her win big on the popular game show.

Her moment to shine was during her last puzzle when she correctly guessed, "Oshkosh and Milwaukee," for a $35,000 prize.

She gasped in disbelief when she realized her win; she couldn't stop smiling when the crowd cheered and her husband hugged her on set.

Before the show was televised, Strother, who is currently working towards her history degree, told the Dispatch she was both nervous and excited to see herself on the small screen.

"You don’t really realize what facial expressions you make when you talk, so it’s nerve-wracking to know I’m going to see them on television, along with the rest of the country, especially in this age of social media where it’s so easy to become a meme," she said, with a laugh.

Wheel of Fortune is celebrating its 35th anniversary this season.

Strother appeared as part of its “Shopping Spree” week, which will feature a set decorated with intricate storefronts from a hat store to a boutique to the “Little Shop of Vowels.”

For her chance to win once-in-a-lifetime vacations, new cars, and cash prizes, she competed against two other contestants to spin the Wheel and solve hangman-style puzzles.

Strother, an Air Force veteran, auditioned for the show in Omaha; she filmed her episode in Los Angeles two months ago.

She was delighted to learn Wheel of Fortune host Pat Sajak is just as charismatic in real life as he is on the small screen.

“It was kind of surreal,” she said. “I was really nervous, but when he and Vanna walked out, they really put everyone at ease. Pat talked to us during commercial breaks and Vanna (White) wished us good luck. Everyone on the set was very hospitable and nice.”

She's thrilled to be a big winner on the show she grew up watching. It was a moment she will remember for the rest of her life.

“I had a blast and it when by way too fast,” Strother said. “I went there knowing, even if I didn’t win much, the experience was going to be the best part.”