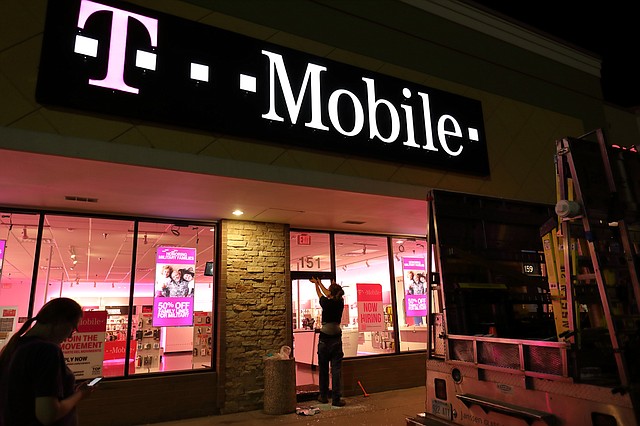 A glass replacement contractor works to repair the damaged door at an Olathe T-Mobile retailer near K-7 and Santa Fe Street after someone threw a large rock through the glass and burglarized the business.

A large rock remains of the floor of the Olathe T-Mobile store after suspects used it to break out the front glass.

An employee of the store told Operation 100 News that the suspects entered the store after throwing a large rock through the front glass. The entire event was recorded on surveillance video. She says the suspects left the store with several devices.

Sgt. Bonney says he's unable to release any details about what, if anything, was taken during the break-in.

Shawnee Police responded on an alarm at the Sprint Store located at 15150 Shawnee Mission Parkway at 12:50 a.m.

About an hour after Olathe Police received their alarm, Shawnee officers were being dispatched to a similar alarm at the Sprint Store, 15150 Shawnee Mission Parkway.

A front window at a Sprint Store, 15150 Shawnee Mission Parkway, was broken out by suspects using a large rock. The rock was left on the sidewalk in front of the business.

At the scene, it was evident that a large rock was used to shatter a window on the front of the business.

Maj. Larson says the suspects did not enter the building.

"We will be working with our partners at Olathe PD to determine if they are related," Maj. Larson said.

Sgt. Bonney confirms to Operation 100 News that two suspects were taken into custody before 5 a.m. Bonney did not elaborate on how the suspects were located or where the arrests occurred.