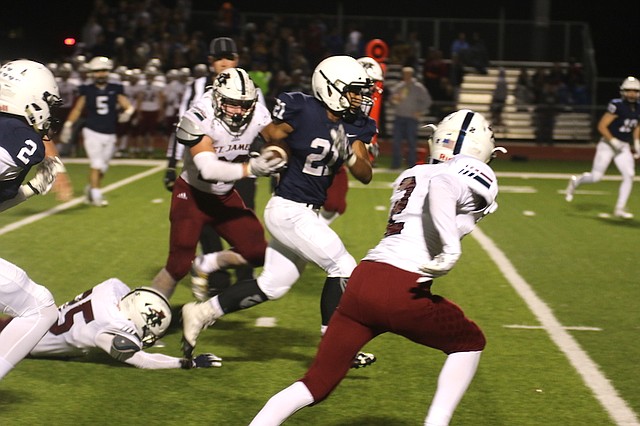 The Mill Valley High School continued its march to a potential State appearance Friday night, as it hosted St. James Academy. In a match that was closer than the final score indicated, Mill Valley (7-3) defeated St. James (2-8) by a score of 24-7.

Mill Valley went on a nine-play drive following the punt. The drive ended when senior quarterback Jordan Preston threw a 12-yard touchdown pass to senior running back Trevor Wieschhaus. Mill Valley took a 7-0 lead with 4:37 remaining in the first quarter.

On the eighth play of St. James' next drive, Moellers was sacked by Mill Valley senior defensive lineman James Smith for a six-yard loss on second down. St. James punted two plays later.

St. James forced a punt on Mill Valley's next possession. St. James went on a 14-play drive. The drive was capped by a 37-yard touchdown pass from Moellers to junior running back Michael Tujague. The game was tied at 7-7 with 5:10 remaining in the half.

St. James got the ball back on Mill Valley's next possession. On the third play of the drive, a Preston pass was intercepted by junior defensive back Beau Grable.

Mill Valley's defense forced a fourth and long on the ninth play of St. James' next drive. St. James kept its offense on the field, by Moellers threw an incomplete pass, giving Mill Valley the ball back with 33.7 seconds remaining in the half.

Preston quickly managed a seven-play drive. Mill Valley connected on a 29-yard field goal to take a 10-7 lead with 1.2 seconds remaining in the first half.

St. James turned Mill Valley over on downs on its first possession of the second half. Mill Valley's receiver made a tough contested catch, but several St. James defenders knocked the ball out of the receiver's hands to force an incomplete pass.

On the first play of Mill Valley's next drive, junior running back Tyler Green scored on a 31-yard touchdown run. Mill Valley took a 17-7 lead with 8:16 remaining in the quarter.

"That (sequence) was very, very big. We had just said to the offense (before the interception) that we were going to get a big turnover. We just had a feeling with the way our defense was playing and how we were swarming to the ball," Mill Valley head coach Joel Applebee said. "We said that the next thing we were going to do was march it down the field. We felt like we needed to seize momentum there."

Hanson recorded his second interception of the game on St. James' next drive. On the third play of the drive, Hanson intercepted Moellers to give the ball back to his team with 7:34 remaining in the quarter.

On the fourth play of Mill Valley's next drive, Green hurdled St. James' defensive line to get into the end zone on a one-yard run. Mill Valley led St. James 24-7 with 6:02 remaining in the quarter.

After one turnover on downs and two punts, Mill Valley got the ball back. On the fourth play of its drive, Mill Valley elected to try a 44-yard field goal with 8:53 remaining in the game. The kick missed.

After a St. James punt, Mill Valley found itself in another field goal situation. On the seventh play of its drive, Mill Valley attempted a 39-yard field goal with 3:29 remaining in the game. The kick missed.

St. James quickly got inside the red zone on a 39-yard catch from Tujague and a 33-yard catch from junior J.J. Tylicki. St. James faced a fourth down situation from Mill Valley's one-yard line. Tylicki took the handoff, but Hanson and Sieperda stopped him short of the goal line to force a turnover on downs with 54.3 seconds remaining in the game.

Mill Valley ran the clock out to win the game.

Green led Mill Valley on the ground with 17 carries for 151 yards and two touchdowns.

"(Green's) been great all year. He runs hard. He's a team guy. I love him. I'm very, very proud of him. He's a hard-nosed runner," Applebee said.

Preston completed 8-of-17 passes for 70 yards and a touchdown. He also threw an interception. Preston also ran the ball 13 times for 63 yards

Moellers completed 18-of-34 passes for 250 yards, one touchdown, and two interceptions for St. James.

Tujague caught nine passes for 158 yards and a touchdown, while also running the ball six times for 21 yards.

Mill Valley will be back in action Nov. 9, when it will face top-seeded — and undefeated — St. Thomas Aquinas in a Sectionals match.