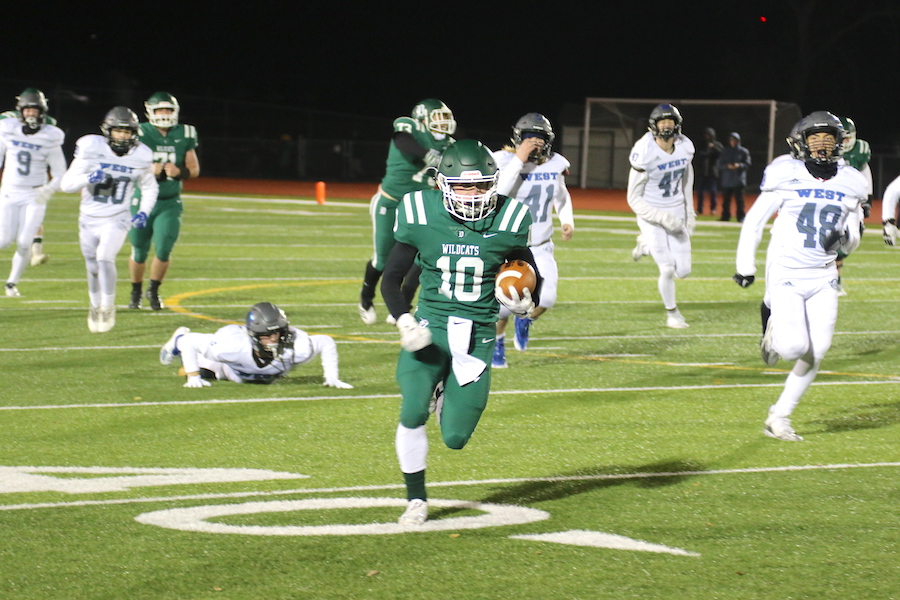 De Soto — After powering through the first two rounds of the Class 5A playoffs, the De Soto High School football team entered Friday night's home Sectionals match against Olathe West High School needing only one more win to advance to the State semifinals.

Senior running back Connor Brady got the majority of the offensive touches on De Soto's opening drive. Brady ran the ball seven times on the drive. However, on his seventh carry, he fumbled the ball to give Olathe West its first possession of the game.

De Soto's defense held Olathe West to a three and out on the following possession. On third down, junior linebacker Mason Parrish sacked Olathe West's quarterback to force a punt.

On the third play of De Soto's next possession, junior quarterback Aaron Mackay ran the ball for a 28-yard gain to put his team in the red zone. Six plays later, sophomore running back Garrett Kellner carried the ball four yards into the end zone for a touchdown. De Soto led Olathe West by a score of 7-0 with 2:45 remaining in the first quarter.

Olathe West quickly went to work on its next drive. On the fifth play of the drive, junior running back Gavan McDaniel raced 45 yards into the end zone to tie the game at 7-7 with 41.3 seconds remaining in the first quarter.

De Soto punted on its next possession. Olathe West went on a 10-play drive to reach De Soto's two-yard line. Senior defensive back Lanz Heath recovered an Olathe West fumble to give De Soto the ball back with 6:49 remaining in the half.

De Soto went three and out on its next possession. Olathe West took the lead two plays later. After a 35-yard reception, it scored on a five-yard touchdown run to take a 7-14 lead with 4:34 remaining in the half.

On the third play of De Soto's next possession, Mackay threw an interception to give the ball back to Olathe West.

Olathe West went on a nine-play drive on its following possession. Olathe West kept its offense on the field on fourth-and-15. The pass fell incomplete, and De Soto got the ball back with 24 seconds remaining in the half.

On the second play of Olathe West's first offensive possession of the second half, Parrish recovered an Olathe West fumble to give his team the ball with 11:31 remaining in the third quarter.

De Soto punted on its next possession. Olathe West went on a nine-play drive following the punt. It connected on a 27-yard field goal to expand its lead to a 7-17 margin with 7:49 remaining in the third quarter.

On the fourth play of De Soto's next drive, sophomore wide receiver Hayden Henderson caught a 24-yard pass to put his team in the red zone. De Soto faced a fourth-and-six from the Olathe West 10-yard line. De Soto decided to try a halfback pass, letting sophomore Tyson Priddy try to throw the ball into the end zone. The pass fell incomplete, and Olathe West got the ball back with 3:28 remaining in the quarter.

"With it being cold, and we had not been down inside the red zone for quite some time, I thought we needed to come away with a touchdown at that point in time to get some momentum going," De Soto head coach Brian King said. "It just didn't work out for us. (Olathe West) did a great job of covering (the play)."

Olathe West went on a 17-play drive on its next possession. It scored on a 10-yard touchdown pass to take a 7-24 lead with 7:08 remaining in regulation.

On the fifth play of its next drive, De Soto fumbled the ball away to give Olathe West another possession with 6:14 remaining in the game.

De Soto forced a turnover-on-downs on its next defensive possession. On second down on De Soto's next offensive possession, senior wide receiver Keegan Sturdy caught a pass and raced 65 yards to get his team inside the Olathe West five-yard line. De Soto was unable to capitalize, as it turned the ball over on downs on Olathe West's two-yard line with 1:13 remaining in the game.

Olathe West ran the clock out to take the win.

"(Mackay) did a phenomenal job. He's one of the first guys to show up and the last guy to leave. He grinds as hard as anybody. He stepped up in a big way (Friday night). He did a great job for us," King said.

Olathe West accumulated approximately 385 total yards during the game. That number included 280 yards on the ground. King talked about what Olathe West did to disrupt his team's defense.

"We've watched them play. They can really sling it around and spread you out horizontally and vertically. Their inside zone run game is really good. They went unbalanced four-by-two, which we weren't getting aligned to early," King said. "They locked us up really well as far as being physical with our defensive line and front seven."

De Soto ended its season with an 8-3 record.