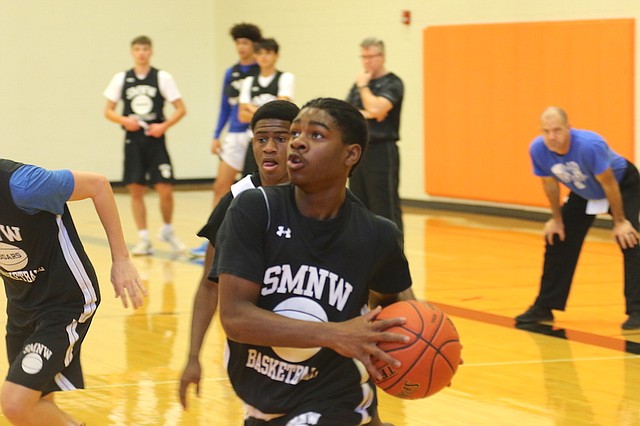 After two weeks of preseason practices, the Shawnee Mission Northwest High School boys' basketball team showcased its squad for the public in a scrimmage Saturday morning. The team was divided into a primarily junior varsity "white" team and a primarily varsity "black" team.

The black team defeated the white team by a final score of 36-40.

The white team narrowed the scrimmage to a one-point margin to start the second quarter, freshman Damar'e Smith converted a layup to increase the black team's lead to 15-18. After the score was narrowed to a 19-20 margin, junior Noah McCord hit two straight three-pointers to give the white team a 25-20 lead.

Sophomore Isaiah Volavongsa hit a three to make it a 25-23 margin, but freshman Landon Wagler connected on a three-pointer to give the white team a 28-23 lead. After the second quarter of the scrimmage, the white team held a 28-25 lead over the black team.

"It's nice to run one of these (scrimmages) and get officials out there so the kids can get a feel for what they're going to call. We were pretty sloppy on both ends of the floor," Rose said. "You kind of expect that in a scrimmage. It gives us an idea of what we've got to work on to get better for our first game."

Talley led all scorers with 13 total points in the scrimmage.

"(Talley) did a nice job. One of the things he's going to have to realize is that he's going to attract a lot of attention. He needs to use his teammates around him. Some nights, he might need to lead us in assists and not in scoring. His role might change from night to night," Rose said.

Wagler finished second across both squads with 11 points. Wagner played the first three quarters of the scrimmage on the junior varsity squad, but switched over to the varsity side for the final period.

"(Wagler) did well playing against the varsity kids, so we brought him over (to the varsity side) to take a good look at him," Rose said. "His growth potential is unlimited. He's playing really well. We look forward to big things from him. If he continues to grow the way that he's been growing so far, there's a chance he's going to get some varsity minutes this year."

Rose talked about how practices have gone this preseason.

"It gets a little hard over Thanksgiving break, because all of their friends are sleeping in, and we're working in the gym. Our level of intensity hasn't been very good. For the most part, we're getting in the things that we need to get in for the first game. Hopefully, our intensity will pick up once we get closer (to the first game)," Rose said.

Shawnee Mission Northwest will have one more week of preseason practice before it begins its season Dec. 4, when it will travel to Topeka to face Washburn Rural High School.

"The things that we're going to focus on (heading into the first game) are the things that we can control, and what we want to be good at," Rose said. "We need to go out there and have a good game plan and try to execute offensively. It's a tough environment for us to play in out there. It's a good place for us to start and see where we're at against one of the better teams in the state."

The Shawnee Mission Northwest girls' basketball team also held a scrimmage Saturday morning. The team was divided into a black and white team. At the end of the scrimmage, the black team defeated the white team by a score of 45-50.

The white team led the black team by a score of 9-6 after the first quarter. It increased its lead to a 13-6 margin before the black team fought back to take a 22-26 lead after the second period.

The black team built a 26-39 lead in the third quarter before the white team fought back to cut the scrimmage to a 34-39 margin heading into the final period.

The white team cut the score to a 38-39 margin in the fourth quarter, and eventually took a 43-42 lead. The black team ended the scrimmage on an 8-2 run to take the victory.