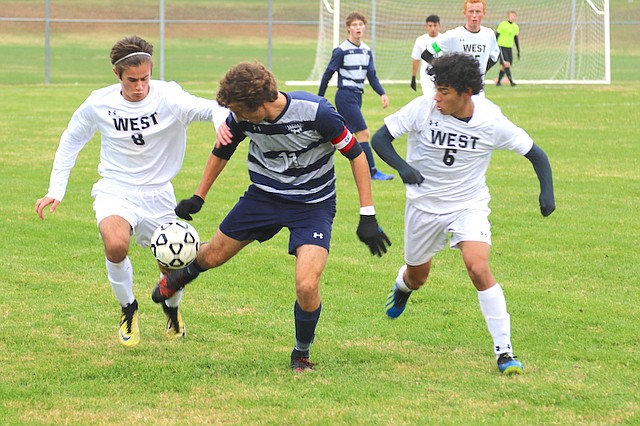 Shawnee Mission West had a shot to take an early lead, as it attempted a goal with 38:25 remaining in the first half. The shot missed.

Mill Valley took the lead with 25:09 remaining in the half. Senior Ricardo Araujo served up a long assist to senior Jake Ashford, who converted a header to give Mill Valley a 1-0 lead over Shawnee Mission West.

"(Araujo) has been serving balls awesome all year. That was an example of one of his that just happened again," Mill Valley head coach Arlan Vomhof said. "He's a really good player. He's a great defender. He's come a long way since his freshman year."

Junior Wesley Sirivongxay was called for a yellow card with 3:56 remaining in the half.

Shawnee Mission West broke the stalemate with 1:37 remaining until halftime, as it knocked through a goal to take a 1-2 lead.

One of the most controversial plays of the game happened with 47.3 seconds remaining in the first half.

Veal was called for a yellow card, which gave Shawnee Mission West a penalty kick opportunity. It converted the kick to take a 1-3 lead heading into halftime.

Vomhof talked about the call.

"I saw (Veal) win a ball. I think any other referee wouldn't have carded him for it. Even the linesman was saying that he didn't think it was really a foul," Vomhof said.

Veal gave his take on the yellow card.

"I'll put it nicely. (I believe) the referee made a mistake. That's all I'm going to say," Veal said.

Vomhof talked about how tough it was to see the play happen.

"It's horrible. When you see what these boys have done all season, and what they've accomplished, it's disappointing that certain things like that tend to disrupt the flow of the game," Vomhof said. "If (the referee) would have called that differently, we would have only been down by one. It would have been a different game. I would have rather seen us play out the game that way."

Shawnee Mission West was called for a yellow card with 36:07 remaining in the second half.

Sophomore Quinten Blair tried to cut into the deficit, but his shot missed with 23:45 left in regulation.

Ashford took a shot at a goal with 23 minutes remaining in the game, but the attempt was blocked by Shawnee Mission West's goalkeeper.

Ashford tried to convert a header with 20:30 remaining in regulation, but the attempt missed.

Mill Valley was unable to find a way to cut into the deficit over the rest of the match.

"When you have certain fouls called against you that you disagree with, it's disappointing. It's disappointing for the boys. We were dealt certain calls, and we had to deal with it," Vomhof said.

Vomhof talked about how challenging Thursday night's loss was for his seniors.

"It's tough. Some of these guys have been on varsity for four years. They knew we had a really great group this season. Moving up to (Class) 6A, we were hoping to really make a run for the championship. It's disappointing," Vomhof said.

Mill Valley ended its season with a 14-4 record.