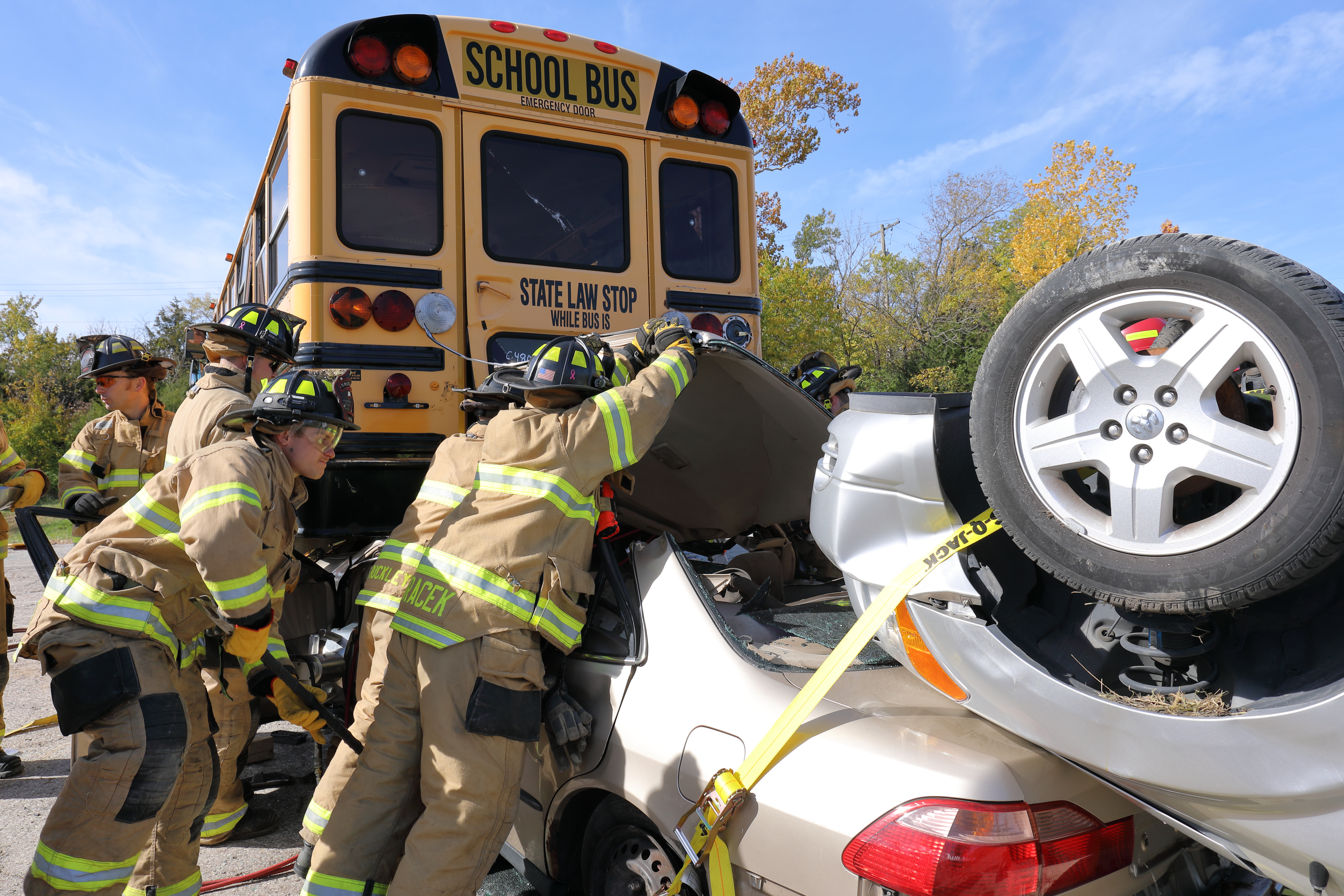 Shawnee firefighters peel back the roof of a vehicle to remove a dummy that was trapped in the simulated crash with a school bus. Enlarge photo

Firefighters arrived on the scene of the simulation to find a school bus involved in a crash with three other vehicles and multiple victims trapped.

Each day the scenario involved a school bus, several vehicles, and volunteers playing the role of injured and hysterical people at the scene.

A volunteer plays the role of a hysterical passenger as firefighters lift her from the school bus.

Eleven volunteers filled the school bus, which in the drill had been rear-ended as part of a chain-reaction crash.

One car was partially under the rear of the bus. A second car was on its roof and partly on top of the first car. A third car was rolled onto its side near the front of the bus and was blocking all access to the door of the bus.

Firefighters had to use struts, straps, and large chains to stabilize all involved vehicles before they could begin the work of safely removing all of the injured.

A firefighter and a Johnson County Med-Act paramedic were lifted through the emergency window of the bus to start evaluating injuries inside as other firefighters worked to cut a hole in the wall of the bus.

One-by-one the injured passengers of the bus were lifted off and then moved across the scene to Johnson County Med-Act’s triage area where their injuries would be evaluated further.

After all of the victims had been removed from the vehicles, firefighters and paramedics gathered to discuss the drill and assess their response and handling of the various aspects.

Shawnee Fire Battalion Chief Ryan Pyle addressed everyone who participated in the exercise after its conclusion.

Deputy Fire Chief Sal Scarpa told Operation 100 News this drill was the first time they had the opportunity to use a school bus.

“On a three or four vehicle crash we may see five or six people with injuries,” he said. “The school bus changes everything, and we have to be prepared for that.”

The school bus was donated to the department for use in the scenario by the Kincaid Group which operates school buses for the Shawnee Mission School District as DS Bus Lines.