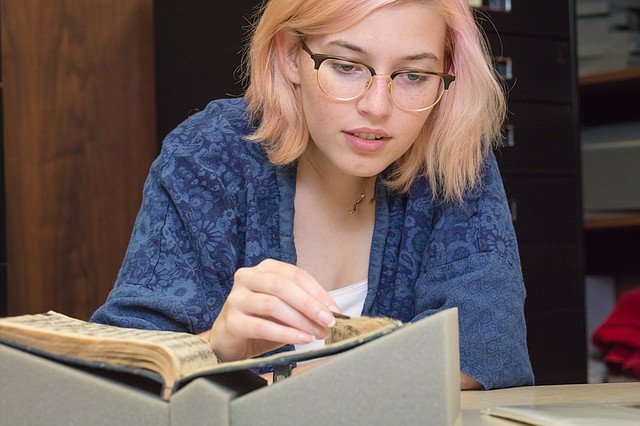 University of Arkansas honors student Claire Hutchinson looks at one volume in a 14-volume history of the Han Dynasty at Mullins Library on campus.

A Shawnee native has found herself in a rare position for any undergraduate student: researching and finding and championing the selection of ancient manuscript’s for her university’s special collections.

Claire Hutchinson, a University of Arkansas sophomore, took on the task for her school’s Mullins Library.

Finding hand-written volumes for the library was one of the assignments for this honors student.

“We came down to Special Collections a lot to handle the manuscripts, because an important part of the class was this hands-on experience,” Hutchinson said. “I noticed that the vast majority of the pieces were in Latin or were Biblical manuscripts from Europe.”

She decided to use her assignment to help balance the cultural scales.

Her research led her to propose that Special Collections buy three texts:

“Claire’s proposal had everything we were looking for,” said assistant professor Joshua Byron Smith, who taught the course. “She found interesting, affordable items that filled cultural and historical gaps in the library’s collection.”

Her work helped the university tremendously.

“These are very versatile texts,” said Smith. “They will be of interest to a wide variety of departments and courses.”

The potential applications, from Islamic cultural studies, to the spread of the Jewish written tradition during the Diaspora, to textual history in general, are broad and exciting.

She is the daughter of Tom and Kerri Hutchinson of Shawnee.