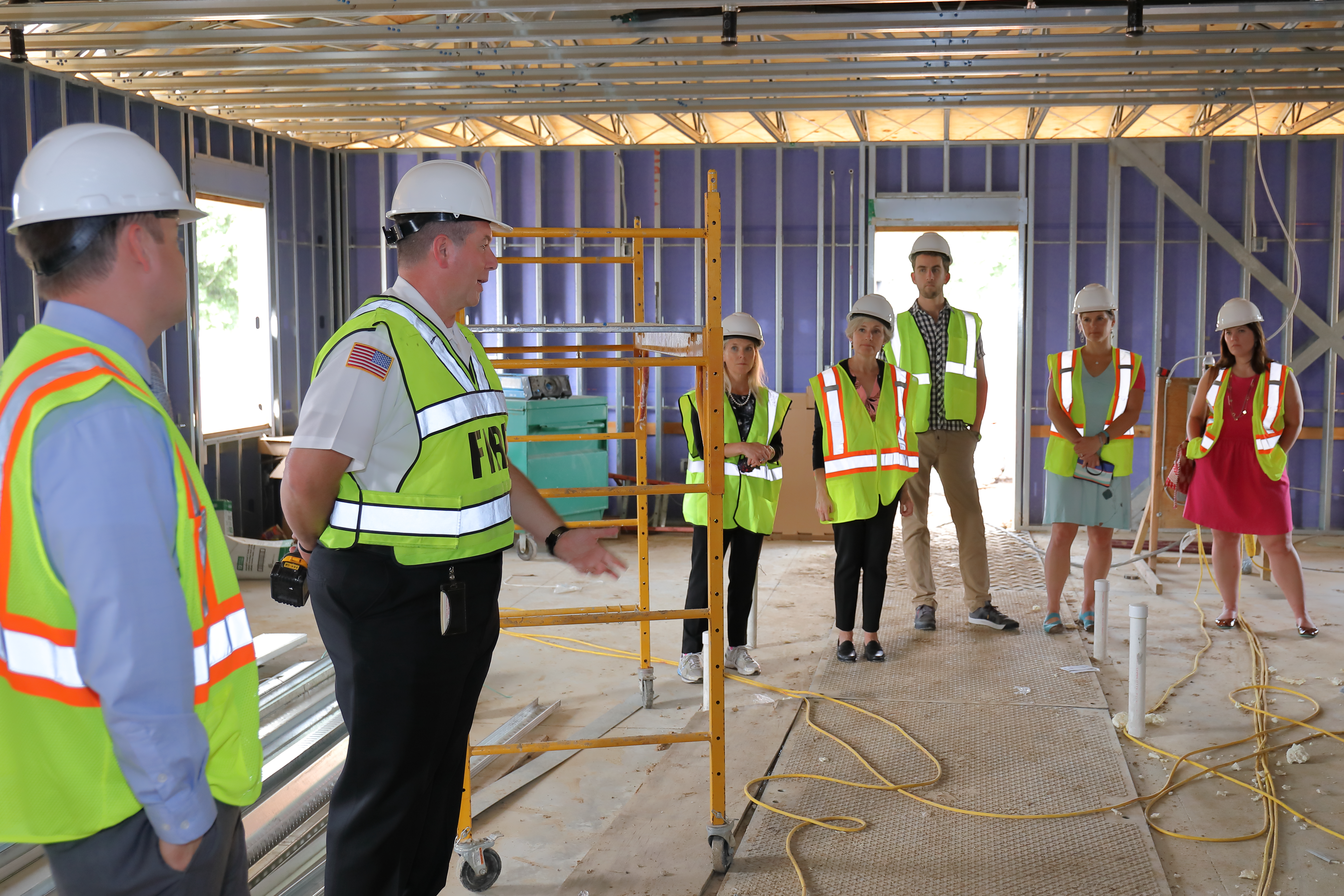 Shawnee Fire Chief John Mattox, second to left, guides council members and city staff on a tour of Fire Station 74, which is under construction in northwestern Shawnee. Enlarge photo

Fire Chief John Mattox led the tour on Sept. 4, guiding the group from room to room of the roughly 9,000 square-foot building, which is being constructed at 53rd Street and Woodsonia Drive.

Nearly half complete, the main structure of the building is constructed, with interior and exterior finishes, and electrical and plumbing in the works.

Above is an outside view of Fire Station 74, which is currently under construction near 53rd Street and Woodsonia Drive.

Sean Sims, Superintendent at McCownGordon Construction, told the Dispatch he’s confident Fire Station 74 will be ready for a Jan. 21 opening.

“We have been lucky on weather and hopefully it stays good,” he said. “Everything is going on schedule.”

The new station will feature six individual bunkrooms, a fitness center, a gear washing station, an expansive storage area and a community/training room.

It also has a few interesting aspects.

The storage room will double as a storm/safety shelter.

Plus, the layout features higher pressure inside the building, to allow exhaust to stay in the bay.

The fire department recently decided to create a small time capsule in the bay of the station. During the station’s grand opening, firefighters will place small items, such as the department’s annual report and a Shawnee T-shirt, inside the capsule, to be opened in 50 years.

Members of the tour were pleased with what they saw.

Mayor Michelle Distler told the Dispatch she thinks the building is coming along beautifully and she can’t wait for it to open.

After all, it was a long time coming.

Earlier this year, Mattox told the Dispatch Fire Station 74 was a top priority for his department because response times to the area are currently nine minutes or longer.

With the new station, those times will drop down to four to five minutes.

Those few minutes will make all the difference when it comes to fires and medical emergencies, Mattox said.

Distler pointed out the new station is just one of many improvements the city plans to make in public safety.

“The next goal is to increase response times in the north eastern section of the city and possibly some squads for medical calls,” she said.

Another member of the tour, Councilwoman Stephanie Meyer, told the Dispatch she appreciated getting an onsite update on the fire station’s progress and she is looking forward to its January 2019 completion.

Mattox was pleased by the positive response to the tour.

“There’s a lot of anticipation for this station,” he said. “As northwest Shawnee grows, we’re growing with it. We appreciate all the support we got from the council to get to this point, so we just wanted to bring awareness and show the council where we’re at.

“They drove by an empty field for a while and then a dirt pile, so we wanted to show them our progress. There’s a lot of work that’s been done which you can’t see just by driving by.”