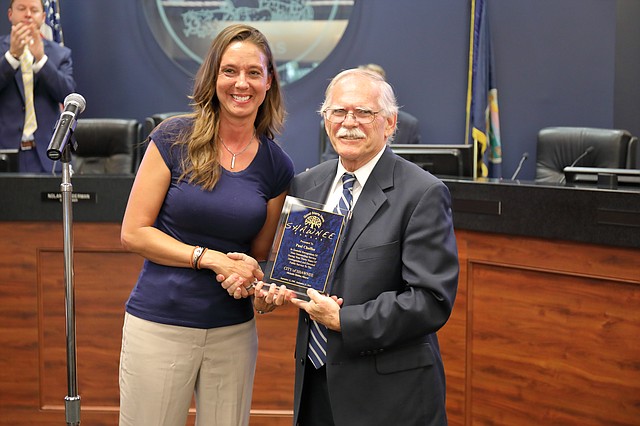 The city of Shawnee has nearly doubled in population since Paul Chaffee joined the planning department 30 years ago.

Over the past few decades, the affable planner has helped Shawnee address and adapt to the challenges faced during the city’s times of annexation and rapid growth.

But now, he’s passing on the baton.

Chaffee retired from the city of Shawnee as the community development director on Friday and that afternoon, dozens of people showed up to say farewell to him at a special ceremony.

Friends bestowed him gifts, cake was served and Mayor Michelle Distler even declared Sept. 21 as Paul Chaffee Day to honor and thank the popular employee for his public service and dedication to the city.

During the reception, Distler told the Dispatch that Chaffee’s retirement represents a huge loss for the city, but she’s happy for his achievements.

“I will miss him so much,” she said. “He’s one of my favorite people and his absence will be felt at city hall. Even before I was elected to the council, he was always so helpful and kind whenever I had questions as a resident. He was always willing to help and explain things, and he was patient about it.”

Her sentiment was echoed by numerous community members who attended the reception.

Elaine Copp, a downtown business owner and longtime Shawnee resident, said every time she had a question or problem, Chaffee was a big help.

“You go to Paul and he always had the right answer for you, or would find someone else who would,” she said. “I will miss him and I don’t know how they (city) is going to replace him. He’s a good friend to have in the city.”

“He has an absolute wealth of knowledge about the city and the growth of the city,” Neighbor continued. “We appreciate his service and everything he’s done for the Shawnee community. He will definitely be missed and I hope he won’t be a stranger to city hall after he leaves.”

Shawnee City Manager Nolan Sunderman told the Dispatch Chaffee has been a tremendous asset to the community.

“You can drive anywhere in the city and Paul has played a part in the development of that area in the past 30 years,” he said. “It’s going to be hard to replace him because he has left some big shoes to fill.”

Chaffee told the Dispatch watching the city grow has been an eye-opening experience over the past 30 years.

“It doesn’t feel like the city has grown so fast, but when I drive down the street and remember when certain things were developed or built, that’s when it hits me how much time has gone by,” he said.

In 1988, Chaffee, his wife Marsha and their two girls, Ashley and Jennifer, left Dodge City for Shawnee to start his career as city planner.

During his career with the city, he has used his passion for reinvesting in established neighborhoods by championing for the Neighborhood Revitalization Program and the continued investment in downtown Shawnee.

He has also been a strong advocate for progress and served as a member of the Economic Development Team, helping to identify key areas for development to bring new commerce and jobs to Shawnee.

The past three decades have been better than he ever could have hoped, Chaffee said.

“The people are what make this town wonderful,” he said. “We hear it all the time, but it is true: Shawnee does feel like a small town. The residents who have embraced everything we do have made my job easier. There was never a day where I didn’t want to go to work. I enjoy helping people and the (city) staff really does feel like one big family, no matter the department.”

Now that he’s retired, Chaffee is looking forward to traveling with his wife and spending much more time with his family, particularly his grandchildren.

The search to fill his position is underway.

Sunderman told the Dispatch the position has been posted, the city has done a series of phone interviews and the city hopes to hire someone in October.