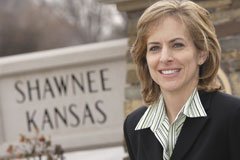 Carol Gonzales' new position as city manager in Shawnee is a chance
for her to put use the seven years of experience she got working as
assistant city manager.

The changing of the guard

Reality of change hasn't quite sunk in for new city manager

It's been just about a week, and it still hasn't quite sunk in for Carol Gonzales that she is now officially managing the city of Shawnee -- that Gary Montague, Shawnee's city manager for 28 years, is gone, and she has become the "head honcho."