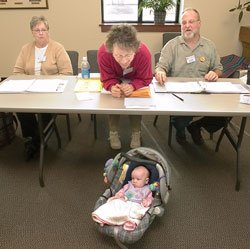 Election worker Patti Combs (center) kept a watchful eye on Kelsey
O'Donnell on the floor in a car seat while her mother Lisa cast her
ballot nearby Tuesday at Sacred Heart Church.

A long and hard-fought battle came to an end Tuesday. Voters chose four candidates for the De Soto School Board. Complete-but-unofficial results from the Johnson County Election Office show two new members will take their positions on the board, along with one incumbent and one former incumbent. Tim Blankenship, Don Clark, Bill Fletcher and Jim Thomas received the most votes in Tuesday's election.